An inn or country inn is a gastronomic establishment with a long history. It is a facility in which travelers can lodge and eat. Guest houses are typically laid out in the countryside or are located on major roads. Where today car parking spaces welcome travelers, there used to be stables and feedings for their exhausted horses.

Inns were possibly first built in Europe with the advent of Roman highways . Many of today's inns in Europe are several centuries old. In addition to their function as a resting place for travelers and pilgrims , they were sometimes also public meeting places because they were centrally located and well located on major roads.

There is a proximity to the so-called Bed and Breakfast accommodations, with a communal dining room, which was also used as a local meeting room or for celebrations, such as weddings (see "Dorfsaal"). The street side of the inns was and was specially designed and decorated and was intended to convince passing travelers of the advantages of the house. The rear had a stable and feeding for the travelers' horses. In the past there was no separate reception , as in today's inns or hotels, but the hospitality and reception took place in just one heated room. The landlord just looked at the door to see who was coming and decided who was allowed in. Many inns were at times just normal large farmhouses or inns with rentable premises.

In the 19th century, the inns played a special role in the growing transport sector in Europe. The industry grew and more and more people were on business trips (see History of Travel ).

With the development of transport, the accommodation providers have adapted to each generation traveler The stagecoach was reliant could be made on its fixed line regular holding where the horses either rest a night or only changed could be, while the driver and the passengers ate something.

The original function of these inns is now divided between several specialized establishments: Hotels, pensions or motels take on the traditional tasks, but focus more on accommodation; Pubs or pubs mainly serve drinks such as alcohol; and ultimately restaurants, taverns or so-called breweries more or less only serve food and drinks. Some hotels also have connected restaurants or restaurants and pubs also rent out some rooms and halls and thus come close to the historical models.

Facade of the Caranansai of Sultanhanı ( Turkey )

Inns as resting places for long-distance travelers exist all over the world. Including in Japan the Honjin (for high military personnel) or the traditional Ryokan , the caravanserai of the Middle East and Central Asia and the Jiuguan in ancient China .

In Asia Minor , at the time of the Seljuks and Ottomans , impressive buildings were erected that functioned as inns ("Han"). These hostels, also regarded as important social meeting places, offered accommodation for people as well as for their vehicles or animals and served as a place of rest for those who traveled on foot.

The Inns in England 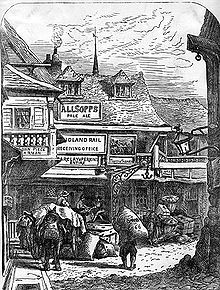 The Tabard Inn, Southwark, London, about 1850

The inn in the English-speaking world is often Inn called. Famous inns in London are or were The George Inn and the expired The Tabard . The Inns were also the starting point of the Elizabethan Theater (see also Inn-Yard Theater ). Before the construction of the first permanent London theaters after Roman times, as u. a. the The Theater (1576) or the Curtain (1577) offered the inns of England, Scotland and Ireland traveling theater companies hold the possibility of their theater performances. Even William Shakespeare began his artistic career first in Inns, such as the Cross Keys Inn before in his Globe Theater celebrated its great successes. At the same time, after that and up to the present day, many inns were and are still places of entertainment events, such as theater, cabaret , dance or music performances or provide rooms for conferences or celebrations.

The overnight stay aspect, as it can be seen in the word Inn , is now emphasized in brand names such as Holiday Inn or Premier Inn . The London Inns of Court still show their former importance as an accommodation option in their names. Some English laws refer to the operator of an inn as an innkeeper . Today the historical term inn is also used by normal restaurants ( pubs ) in Great Britain . Either because they have been resident for a long time or simply as an enhancement of their name.