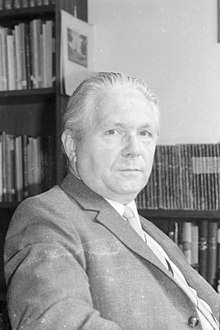 Gerhard Cordes was born in 1908 as the son of Friedrich and Helene Cordes, b. Lange, born in Goslar. There he attended the secondary school and passed the Abitur in 1927. From 1927 he studied history and German studies , especially Low German philology, in Göttingen and from 1929 in Hamburg. At the University of Hamburg he received his doctorate in 1932 with a dissertation on the late medieval written language in Goslar. From 1933 to 1942 he worked as an assistant at the Germanic seminar at the University of Hamburg. During this time he worked on the Middle Low German Concise Dictionary . This long-term project was founded in 1923 by Cordes' teachers Agathe Lasch and Conrad Borchling . In 1938 he completed his habilitation with the work Zur Sprache Eilhards von Oberg . Cordes received a call to the University of Berlin in 1942 , where he took over the newly established professorship for Germanic, in particular Low German, philology, although due to the war he was only able to provide a few months. During the Second World War he did several years of military service .

At the time of National Socialism , Cordes joined the SA in July 1933 . There he was responsible for political and ideological training as a squad leader on his platoon. In 1936 he became a member of the NSV, in 1937 in the NSD Lecturer Association and in 1939 in the NSDAP .

Due to his membership in National Socialist associations, Cordes was initially prohibited from participating in university operations after the end of the war. From 1948 he worked as a lecturer for Low German and Dutch at the University of Kiel . In 1952 he was given an extraordinary professorship for Low German Philology. In 1957 this was converted into a scheduled professorship for Germans, especially Low German, philology. Cordes took over the management of the Middle Low German Dictionary from 1948 until his death.

Since 1930 he had been a member of the Association for Low German Language Research , of which he was chairman from 1966 to 1975. In 1961 he was honored with the culture prize of the city of Goslar. Gerhard Cordes died in Göttingen in August 1985 at the age of 76.

Cordes' research focus was Middle Low German , especially in the East Westphalian language area. His important publications include the Old Low German Elementary Book (1973), the Handbook of Low German Linguistics and Literature Studies (1983, together with Dieter Möhn ) and the Central Low German Concise Dictionary, which has been edited over decades . Editing and research into medieval texts, including writings by Hermann Bote , Braunschweiger and Goslar chronicles and oldest East Westphalian documents, were also part of Cordes' fields of work.