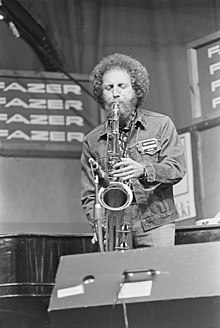 Niewood first played with Buddy Rich and Louie Bellson . He became known as a longtime member of the band Chuck Mangiones , which he joined in 1968. At the same time he continued his studies at the Eastman School of Music , which he graduated in 1970; he had previously received a BA in Industrial Relations from the University at Buffalo in 1965 . As a leader, Niewood rarely appeared, after two albums for A&M in 1975 and 1977 he was again active for other artists for a long time, including Simon & Garfunkel at their famous concert in Central Park in 1981 and Gerry Mulligan as well Gil Evans .

1985 Niewood again released an album that is stylistically associated with fusion and smooth jazz and was released on the audiophile label dmp; He was supported by prominent musicians from the fusion scene such as Dave Weckl and Joe Beck . As a leader he later recorded two more albums; In 2004 his last album was released, on which his son Adam , also a saxophonist, can be heard. From the 1990s he played again with Mangione and continued to work as a guest musician a. a. for Sinéad O'Connor and Liza Minnelli . Niewood can also be heard on a number of movie soundtracks (such as Harry and Sally and In the Streets of the Bronx ). He was also principal saxophonist in the Radio City Music Hall Orchestra.