In the past, the core of the whips was made of wood such as hazelnut rods, rattan , lichen or willow sticks, nowadays a fiberglass stick is mainly used. In general, a handle about the width of a hand is formed by an appropriate covering of one end, which then turns into a long rod - between 25 and 120 cm long. There is usually a leather hand strap on the handle so that the crop is less easily lost.

At the end, both small stiffened cords are used (with a bush at the end), which corresponds to the bang cord common with whips , or they end in a wide flap made of a piece of leather or plastic. The stick and handles are either covered with plastic or covered with leather (mostly with jumping whips).

The whip can be used in different places on the horse's body, depending on the length of the whip, the desired effect and riding style. The normal position for using the whip when riding dressage is the horse's flank, as close as possible to the point where the rider's lower leg also presses against the horse's body. In remounts the shoulder is often a more effective use. Long dressage whips can also be used on the horse's croup to improve the flexion of the legs .

The length of the device depends on the intended use. For show jumping , either short jumping sticks with a wide leather flap at the end or the normal short jumping whips from about 50 cm are used. Whips from 110 to 130 cm are used in dressage. The maximum lengths for whips permitted at German tournaments are 75 cm with punch (jumping) and 120 cm with punch (dressage).

Most of the whips used today have a core made of fiberglass, which is wrapped in a fabric jacket, which can also be varnished to prevent the whip from chafing on the breeches . But whips are also traditionally cut from hazelnut rods.

driving help
With the whip, you can tick the horse at the exact moment of the footing and thus have a driving effect. The propulsive effect is more pronounced with the whip aid than with the thigh aid or the spur aid , which also has a gathering effect (effet d'ensemble in classical riding). The propulsive effect of the whip aid lasts longer, so it affects several steps, while the spur only has a brief effect.

The driving aid on the shoulder works either through touch, through the clapping sound (jumping stick with clap) or optically. In horse races , the whips should only be shown to the horses and not used for striking.

punitive help
The whip can be used as a punishment in the event of clear disobedience by the horse. In this case, the whip must be used as vigorously as possible immediately after the disobedience, as this is the only way the horse can associate blow and disobedience. Delayed hitting or multiple hitting unsettles the horse. Under no circumstances may the whip be used in a punitive manner if a rider's mistake preceded or the horse was overwhelmed, i.e. the horse was unable to solve the task due to its education or training status. In its guidelines, the German Equestrian Association rejects punitive aids: “ Every reaction in the sense of a 'punishment' according to human understanding is clearly to be rejected, because one cannot assume that a horse can think abstractly like a human. "(Guidelines for Riding and Driving, Volume 1, 1.1.2 The relationship between rider and horse, ISBN 978-3-88542-721-6 ) 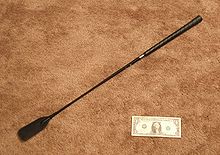 Dressage whip
It has a handle, a very long stick and a punch on the end.
Jumping stick
consists of a short handle, a short, not entirely flexible body of approx. 30 cm and at the end of a small clap (a bent piece of leather). This makes the impact less painful, but quite loud.
Jockey whip
Like the jumping whip, it consists of a short handle, a short body. Their classic use is in horse racing .
Telescopic equipment
A device consisting of several segments, similar to a radio antenna, which can be pushed together and is easy to transport. Telescopic crops are mainly used in ground work.
Birch crop
Traditionally used at the Spanish Riding School , Vienna. Every rider cuts his own crops (approx. 80 to 100 pieces) in January. Only the straight trunk of a six- to eight-year-old birch is used, the branches are cut off and the trunk is split repeatedly to obtain the whips. For a longer shelf life, birch crops are placed in the water for a day before use.
Swabs or hand tools
Used by hand at the Spanish Riding School for handicraft, piaffe and school jumps. Between 170 and 190 cm long, not too heavy and very elastic at the end.

Driving whip
It is used for driving , has a long body - up to 2 m - and a medium-length stroke and thus represents the transition between whip and whip. There are two versions. The bow whip is used for classic tension . Here the transition between punch and stick is curved. The stick whip is used for itching tension. Here the punch is attached to the stick with an eyelet.
Lunging device
is a name for a short lunging whip that is used for lunging , free running or free jumping . The length of the whip from 1.80 m to 2.50 m usually corresponds to the length of the stroke.

Sjamboks
A type of whip made of polypropylene that is native to Africa and is used by elephants, rhinos or as a replacement for a baton by the police. Sjamboks used to be made from hippopotamus skin, hence the nickname hippopotamus whip .