Glenkinchie is a whiskey distillery near Pencaitland in Scotland . The distillery belongs to the spirits group Diageo (formerly United Distillers), and the whiskey is marketed as part of the group's Classic Malts series. Some of the distillery buildings are classified in category B in the Scottish list of monuments.

The distillery was founded under the name Milton in 1825 by the brothers George and John Rate and was only renamed Glenkinchie in 1837 . In 1853 the Rate brothers went bankrupt and no more whiskey was produced until 1881. In 1914 the distillery became part of Scottish Malt Distillers (SMD). Like many others, the distillery remained closed between 1917 and 1920. In 1968 the floor maltings were closed and in 1969 it was converted into a whiskey museum. In 1987 the distillery went to United Distillers & Vintners (UDV) and ultimately to Diageo . Today it is one of the last operating distilleries in the Lowlands . 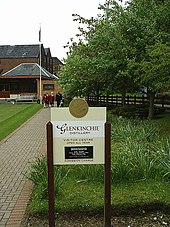 Glenkinchie has a visitor center and can be visited. Among other things, there is a large model on which the individual steps in whiskey production are explained. In December 2018, a building application for the conversion of a multi-storey warehouse into a new visitor center with tasting facilities and direct bottling from the barrel was approved.