The Caol Ila distillery ([ kʌl iːlə ]; » Islay-Sund «) is a distillery for whiskey on the Scottish island of Islay . It produces various single malt whiskeys , including one of the 13 classic malts .

The distillery was founded in 1846 by Hector Henderson, who also built Littlemill , in a bay on the east coast of Islay, a little north of Port Askaig directly on Islay Sound. (Right at the northern end of today's A846 road ). Bunnahabhain can be found less than five kilometers north .

In 1854, Norman Buchanan, the operator of the Isle of Jura distillery at the time , took over the distillery. In 1863 Caol Ila fell to Bulloch, Lade & Co. , who expanded and renovated the distillery in 1879. In 1920 Caol Ila went to Robertson & Baxter . In 1927 the still ended up with the Distillers Company Limited (DCL). In 1930, DCL delegated operational management to its subsidiary Scotish Malt Distillers (SMD), which they shut down until 1937. After only four years of production, the next break followed in 1941, which lasted until 1945. The distillery was completely renovated from April 1972 to January 1974, during which time there was no production. The number of stills has now been increased from two to six. The owner DCL became United Distillers (UD) in 1987 and then Diageo in 1999 . The subsidiary SMD is now called United Malt and Grain Distillers (UMGD) and holds the license that was held by Bulloch, Lade & Co. until 1992 . The original bottlings of the single malt have been available again since 1988.

In addition to its own warehouses, the Lochindaal distillery near Port Charlotte , which has been closed since 1929, is also used. The annual output is more than 6.0 million liters. Most of the production goes into blending. In addition to the blends from Bulloch Lade , a vatted malt called Glen Ila should also be mentioned here. Traditionally, the malts are rarely aged in sherry barrels, which makes the few sherry barrel bottlings (mostly from independent bottlers ) coveted rarities.

The 12-year-old Hidden Malt will be used as the second malt by Islay from 2006 to expand the Classic Malts series. There is also a bottling for the Distillers Edition of the same series with a Moscatel finish. 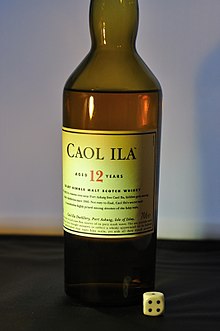 Caol Ila has a visitor center and can be visited.