The title of this article is ambiguous. Further meanings are listed under Gose (disambiguation) .

The Gose is a type of beer that originally comes from Goslar .

The name is probably derived from the small Harz river Gose , from which the master brewers obtained the water for making beer as early as the Middle Ages . In the Middle Ages, the Gose spread from the Harz Mountains and established itself primarily in the area around Dessau , Halle and Leipzig .

The Gose is a separate, old beer type which has a certain similarity with both Berliner Weisse and with Belgian lambic beers and their special form of Geuze has. Gose used to be made, like most beers, through spontaneous fermentation . Today, the top-fermented brewing method is used, whereby, in addition to the alcoholic, bacterial lactic acid fermentation takes place, which leads to the typical sour taste. Another characteristic is the addition of table salt and coriander . 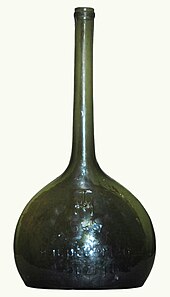 According to unconfirmed traditions, the Roman-German king and later Emperor Otto III. He was already a lover of the Gose around the year 1000, which he drank when his sister Adelheid visited the Quedlinburg Abbey .

The oldest document in which the Gose, brewed in the monastery Ilsenburg , mentioning it is dated March 27, 1332. Another document mentioning there in 1397, in the town of Goslar Gerhard from the mountain , the Bishop of Hildesheim , a Fass Gosebier sent.

In 1744, the geographer Johann Gottfried Gregorii alias MELISSANTES published a list of 35 of the best-known German beers at the time, including Gose, in a description of the brewer's profession.

According to legend, Prince Leopold von Anhalt-Dessau (the old Dessauer ) introduced the Gose in 1738 in Leipzig, where it soon enjoyed great popularity. The spread of the Gose in the Leipzig area is documented from 1824. In that year Johann Philipp Ledermann, a brewery clerk from Goslar in the Harz Mountains, successfully applied to the brewery of the Döllnitz manor near Halle with his knowledge of recipes and technology.

In the 19th century, the Gose was a common, mostly cloudy wheat beer , which was lexically ascribed to be difficult to digest up to diarrhea , but which on the other hand gives "a nice beer soup ". Around 1900 the Gose was the most popular beer in the trade fair city, so Leipzig was also called the Gosestadt . In the meantime, the manor brewery in Döllnitz had developed into the most important supplier.

After the brewery in Döllnitz was expropriated and dismantled by the Soviet occupation forces as part of the German reparations payments in 1945 , there was no Gose in Leipzig. In 1949, the Leipzig master brewer Friedrich Wurzler resumed production in a small brewery and supplied a number of Gose gifts. With the exception of the Hotel Fröhlich in Wintergartenstrasse as Leipzig's last pub, these bars closed until 1958. The Wurzler brewery gave up in 1966. There was no longer a Gose in Leipzig.

In 1986 the Leipzig university professor and designer Lothar Goldhahn had Gose brewed again according to the old recipe in the wheat beer brewery of the VEB Getränkekombinat Berlin and opened the renovated Gosenschenke without hesitation in Leipzig. A second Gosenschenke with its own Gosebrauerei opened in 2000 by the Weißenburg brewery owner Thomas Schneider in the renovated Bayerischer Bahnhof . Gose can also be found on the menu again as a beer specialty in other Leipzig inns.

Gose brewing in Goslar ceased in the mid-19th century. The local master brewer Andreas Wagenführer only started production again in 1993. Since 2004, the Brauhaus Goslar has been offering different types of Harzer Urbier, which are served in various restaurants and pubs as a local specialty. In 2010 the beer specialty was also made in Austria : the beer magic in Brunn am Gebirge took over the recipe from the Goslar brewery. The fresh goose was bottled shortly before the end of the main fermentation to enable real bottle aging with secondary fermentation.

In 1999 the old Döllnitz goose tradition was resumed by Adolf Goedecke and Tilo Jänichen. After the Ritterguts Gose was first brewed in the Leipzig pub brewery Zum Kaiser Napoleon , the company soon switched to the Ernst Bauer family brewery in Leipzig for capacity reasons. From 2007 the Original Ritterguts Gose was brewed in the Hartmannsdorfer Brauhaus near Chemnitz, followed by another switch to the Chemnitz brewery Reichenbrand in 2015.

Due to the microbrewery trend in North America, Gose has also been brewed as a specialty on a small scale in the USA and Canada since the 2010s. 2014 took Bonner engineer Fritz Wülfing with his Gose from the can at the World Beer Cup in Denver, Colorado in part. The Original Ritterguts Gose was awarded gold twice at the World Beer Awards in 2013 (“World's Best Gose”). At the Great American Beer Festival 2014, master brewer Kevin Blodger won the silver medal in the German-Style Sour Ale category with his “Old Pro Gose” from Union Craft Brewing in Baltimore .

International Happy Gose Day takes place on November 17th every year. It was launched in 2015 and has been celebrated by goose lovers around the world ever since. Similar to other beer festivals, the International Happy Gose Day serves to recall the Gose as a cultural drink in its diversity and to drink Gose together. Especially breweries, restaurants, hobby brewers and beer lovers take part in this festival day.

The traditional mixed drinks with Leipziger Gose are: