This article deals with the preparation of scientific texts; compare scientific publication . For general information on scientific activity, see Science and Research .

A scientific work is a systematically structured text in which one or more scientists present the result of his or her independent research . Scientific work is generally created at universities or other, including private, research institutions and is written by students , doctoral students , professors or other researchers . However, this is not a mandatory feature. Before scientific conferences or in the case of special editions of a scientific journal , a call for papers is used to request the submission of scientific papers.

Scientific work aims to create new knowledge, and scientific work in the sense of this lemma is one of several formats in which the results of scientific work can be presented for further research and teaching. Other formats would be B. Research colloquia or lectures at a scientific conference .

The methodology is basically based on the respective subject culture and the methods used in it. In sciences that distinguish between theoretical and empirical working methods, a distinction is made between theoretical work that develops or reviews theses on the basis of existing literature (also: literature study), and empirical work in which research is carried out directly on the object of investigation, which is then carried out as part of the work is documented. In hermeneutically oriented subjects, depending on the subject and the objective of the knowledge, a distinction can be made between research-based and expert-report-related styles and reporting or interpretative (analytical) objectives, whereby there are also corresponding combinations. So z. B. Sources and research status are reported before the sources are analyzed, or z. For example, an analysis must first be carried out, which is then discussed in the light of the state of research. 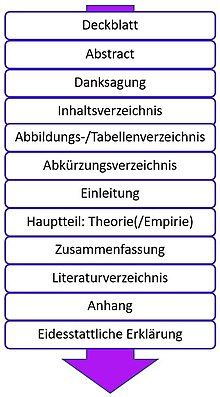 Example of a possible structure for a scientific paper

As part of a university degree, students must create several times scientific work, namely homework, study and seminar papers . The course is regularly concluded with a scientific thesis , e.g. a diploma , master's , bachelor's or master's thesis , which is assessed by the supervisor, the responsible university professor and, if necessary, other experts.

For these theses, it is particularly important that careful and conscientious advice and support for the candidate by the supervising university professor is an important basis for their success. In practice, candidates are looked after in different ways. Some lecturers have a passive style who only give their input on demand, others have a very active style. They demand regular discussions in which they are informed about the progress of the work and in which they express their suggestions and criticisms.

Further degrees for higher scientific qualifications can be achieved through a dissertation and habilitation thesis . Only after the dissertation is it expected that the work not only reflects the state of research, but also brings about greater progress in knowledge. Smaller gains in knowledge are already expected with a bachelor thesis. It should be noted, however, that this can vary from university to university, from institute to institute and from lecturer to lecturer.

The components of the scientific work are not standardized; they are often given by the supervisor, for example in a special guide. Final degree theses and academic papers with further qualifications usually consist of the following components: Title page; Preface; Contents; List of abbreviations; List of figures, tables or overviews; Text part (problem definition, definition of terms, historical remarks, research method - only for empirical work - course of the investigation, main part (s), summary or conclusion or outlook); Attachment; Bibliography; Declaration on honor.

Scientific work is also created in the scientific community by writing research reports (on research results) or scientific articles for specialist journals. The scientific requirements also apply to these works.

Scientific work describes a methodical-systematic procedure in which the results of the work are objectively comprehensible or repeatable for everyone. This means that sources are disclosed ( cited ) and experiments are described in such a way that they can be reproduced . Who reads a scientific work can always recognize based on what facts and evidence of the author to his conclusions reached in which research results of other scientists, he invokes ( citation are) and what (new) aspects of it.

In the humanities and natural sciences, the requirement for scientific work is based on the principle that there is never just one source of information on a topic, but always several. The following procedures are particularly characteristic of the humanities .

In a first step, the scientists inserted on the main aspects of his subject a coherent rough outline and sighted on their basis suitable sources (primary and secondary literature ). He sifts through databases, goes to archives or libraries and looks for scientific papers on his topic or on aspects of his topic. He compiles a bibliography and writes excerpts . In the bibliography of the work, however, he only needs to mention the works that were also cited. The rough structure and literature research complement and develop mutually so that the literature research can produce new bullet points, which can trigger new literature research, etc.

In the second step, he reviews the material and compares sources and literature. The goals can be varied. For example, an author can try to uncover discrepancies in the literature, to merge several positions, to refute individual positions or to make them more precise or to expand. It is also important that the author develops his own opinion. However, this “own opinion” must not be confused with the reproduction of one's own emotions or the subjective perception of a topic. Rather, the author takes a well-founded scientific point of view that he has achieved through intensive study of his research subject. Whether your own opinion has to represent an innovative contribution to research depends on the framework in which the scientific work is written. This is not necessarily expected in academic work during the course. It is a must for everything that comes after graduation.

In the third step, the author begins to write a scientific paper. He presents more or less briefly what publications he has already found and what they can contribute to their own project.

Summaries of the various publications or also the summary of individual chapters or sections, which are then compared with excerpts from other works, are possible. It is also possible to quote foreign authors verbatim.

In any case, the origin of a thought, concept, idea or empirical number must be named. When providing evidence, a distinction is made between quotations (verbatim transfers) and borrowings (not literal, analogous transfers). In both cases, the sources are given in scientific notes (often in the form of a footnote ). In the case of quotations, the author, title, place of publication, year of publication and the page (s) used are given; in the case of borrowings, the source is usually preceded by a “see” or “cf.”. The same applies to sources from the Internet. Every website is a source or literature that must be specified in one's own scientific work ( URL and calendar date of access). The respective citation style is often determined by the subject, the lecturer, the institute or the university.

The exact indication of origin is important for the verifiability of an assertion. A statement must be traceable back to the source and therefore verifiable. This also serves to protect the scientist himself. If he has accepted incorrect information without checking and has not stated the origin, he will be held responsible for the error himself. Exceptions to this rule are general knowledge (" Konrad Adenauer was the first Federal Chancellor of the Federal Republic of Germany"), proverbs ("The ax in the house saves the carpenter") or subject-specific basic knowledge that must be known to a peer group in the relevant subject area (e.g. Concept of metaphor in a literary studies course).

As a rule, all scientific publications , especially monographs and journal articles, can be cited. In individual cases, gray literature can also be used. Non-scientific sources of information (e.g. popular literature , tabloid magazines , private websites) and reference works ( Brockhaus Encyclopedia ) are usually not cited literature. Whether Wikipedia can be quoted is controversial. Online providers who sell term papers from other students are usually not viewed by lecturers as scientific publications and therefore fall into the category of non-citable publications. In addition to the citation also plays Zitierwürdigkeit an essential role in the selection of sources.

In a fourth step, the scientist develops his own idea; this question reveals the author's interest in knowledge and has a direct influence on the structure of his argumentation . To do this, he gathers facts or examples and presents what he concludes from the facts or examples presented. He tries to provide evidence or evidence for every allegation and to justify every argument. The argumentation in a scientific paper follows the rules of logic . Finally, it is indispensable to secure the results in the form of a conclusion (often called “result”, “conclusion”, “conclusion” or “conclusions”) or a “summary”. When summarizing , it should be noted that no new thoughts or problems may be introduced here. In the case of a publication, an abstract is often prefixed, i.e. H. a brief summary of the concept, method (s) and result (s) of the work. The sequence shown is, however, schematic. In reality, developing your own theses and reading sources often overlap.

There are technical terms in many scientific fields . It is not necessary for scientific papers to use foreign words in a particular way , but the corresponding technical terms are often common within the scientific community and are therefore easier to understand. Sometimes the same term is used differently by different authors. In this case, the author must write in what sense he is using the term. If necessary, an author can also introduce his own terms . He does this by defining them and then always using them in the same sense.

The individual steps are ideally described here as being clearly separated and building on one another. In practice, the individual steps are often confused and sometimes occur at the same time. Own standpoints are often developed during the literature search. In some cases, this happens even before the literature research, which triggers the desire to write a scientific paper on a topic at all.