This article is about the fish. For other meanings, see Guppy (disambiguation) .

The Guppy ( Poecilia reticulata ; earlier Lebistes reticulatus ) is one of the most popular freshwater aquarium fish within the livebearing toothcarps (Poeciliinae). The viviparous guppy usually reproduces very quickly in the aquarium . It originally comes from the fresh waters of the Caribbean and the coastal waters of northern South America .

The name "Guppy" goes back to Robert John Lechmere Guppy (1836-1916), who in 1866 sent the British Museum several specimens of the species that he had collected on Trinidad . Since it was assumed that the fish were not identical to the already known Poecilia reticulata , the species was initially described as a separate species under the name Girardinus guppyi . Even if the identity of the guppies with Poecilia reticulata is largely undisputed today, they have retained the name from that time.

The natural range includes northern South America and some offshore islands in the Caribbean. Guppy populations exist in Western Venezuela and Guyana as well as on the islands of the Netherlands Antilles , on Trinidad, Barbados , Grenada , Saint Thomas , Antigua and the Leeward Islands . As a neozoon , it is also widespread in tropical and subtropical waters around the world, as it was often introduced to control mosquitoes or abandoned by aquarists. It is also listed as a neozoon in Germany and Austria. The occurrence is limited to thermal springs and their streams or to the outflows of cooling or sewage water from power plants and industrial plants.

The males of the cultivated forms are almost 3 cm tall without a tail fin, the females up to 6 cm. The wild forms remain significantly smaller, males up to 2.5 cm, females up to 4.5 cm. The guppy shows pronounced sexual dimorphism . The males are smaller, slimmer and more colorful than the females. They also have a gonopodium , i.e. an anal fin that has been transformed into a mating organ, which can be recognized in young guppy males as early as four weeks. Guppies are viviparous. They do not care for the brood and even consider their young to be prey. However, this does not apply to all tribes, sometimes the young remain unmolested.

They can be kept at room temperature (possible: 16–30 ° C; optimal: 24–26 ° C). Imports from warmer regions of Europe are more susceptible to disease as they are used to seawater additives and possibly antibiotics . They often only have a very short life expectancy in the home aquarium, but their offspring are not so susceptible. Aquarists in Central Europe are usually better served with local offspring that are used to the water there.

Females become sexually mature at three months (males earlier), although they can be mated some time before the first gestation because they store the semen. This supply is sufficient for up to eleven litters, whereby the individual litters consist of approx. 20 young. If, for breeding reasons, you want to be sure which male the young are from, you should separate the females from the males before the fourth week of life. Usually the males are placed in another tank as soon as they identify themselves as such. The female tank has to be closely controlled so as not to miss a late male, which can set the breeding back a few months. Early pregnancy has no negative impact on the health of the females. Females who grew up without males for a long time are sometimes said to have reduced fertility.

Diverse cultivated forms have been created from the wild form. Both professional breeders and novice breeders have devoted themselves to the guppy for many decades, and an overwhelming abundance of colors, patterns, and shapes exists today. But by far not all limits have been explored. New color forms are regularly added to the existing ones. There are international rules for the breeding of so-called guppy strains, which describe the different breeding forms. The tribes are divided into different types of guppies after they have been flooded. 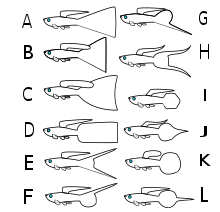 In addition to the different fin shapes, a distinction is made between the different basic and opaque colors. The established standard of the guppy breeders IHS, International High Breeding Standard , allows twelve different forms. Mainly the shape of the dorsal and caudal fins and an appealing color are breeding goals, but the vitality and fertility of the animals should not be neglected either.

In Germany there are currently up to seven exhibitions annually, at which between 130 and 250 trios of guppies can be seen.

The so-called Endlers Guppy can be seen as a separate species . Up to now it has been found to live wild in a freshwater lagoon in Venezuela and in surrounding waters. Due to the destruction of the biotope, it no longer exists in the Laguna dos Patos, but it does exist in other waters in this area. Its scientific name is Poecilia wingei Poeser, Kempkes & Isbrücker, 2005.

The construction of the gonopodium and the other form of the "normal" guppy allowed this new description. The rarer, relatively pure preserved specimens are very similar to the wild forms. The Endler are slightly smaller than the well-known cultivated forms that can be found more often in pet shops, but they are just as colorful.

The reproductive behavior of the guppies is characterized, among other things, by an imitation effect . As various studies have shown, female guppies prefer males as sexual partners that have already been selected by other females and reject partners who have already been rejected by other females. Male guppies also harass females of other fish species that look similar to their own, preventing them from mating. The aggressive approach of guppies to foreign females has the consequence that these even avoid the males of their own species and no longer reproduce. In this way, guppies crowd out their competitors and secure access to food sources.

Females try to escape the harassing attention of males and form their own groups or seek out new social niches. Aggressively advertising males are a factor in evolutionary change. It is observed that the color of the iris of aggressive males turns black due to hormonal influences. Constant male courtship behavior also means that the females often redirect their aggression to their own mates. If the habitat of the guppies is narrowed down, the aggressive behavior of the fish among each other increases significantly. In this case, "bite hierarchies" are formed. These biting attacks can be so persistent and vehement that weaker animals perish.

In the wild, guppies live in complex and highly structured social networks. A typical guppy group consists of 2 to 20 individuals. These groups break up overnight and reform the following morning. In a study carried out in 2004, all guppies in a pool were caught, tagged and released together again. This procedure was repeated 1,000 times. It was found that the groups were by no means randomly reassembled. Rather, the test animals showed a tendency to team up with those guppies with whom they had previously swum. It was particularly noticeable that the same pairs of females found each other again and again.

One possible explanation for this behavior is that guppies recognize each other and actively try to spend more time with certain individuals than with others. Behavior that we would call friendship in humans.

In Trinidad, free-living guppies are often and deliberately preyed on pike cichlids of the species Crenicichla alta , which live primarily in the calm lower reaches of water, but not above rapids or waterfalls at higher altitudes. The higher in the lower reaches selection pressure by Crenicichla alta has meant that the people living there guppies to breed at a younger age and diminutive are than those in the upper reaches of this predator spared lasting guppies. In addition, the litters of the females are larger in the lower reaches than in the upper reaches. After it had been proven that these differences are genetically determined, the working group led by the American evolutionary biologist David N. Reznick began a long-term study in Trinidad: Guppies from the risky lower reaches of a body of water were released above a waterfall, in a body of water which until then had neither guppies nor Crenicichla alta ; The only predator in this area were brooklings of the species Rivulus hartii , which - unlike Crenicichla alta - do not specialize in guppies as prey. The guppies released in the upper reaches established themselves as a new population there and were measured year after year: after only 20 generations they became sexually mature than their original population, and the litters of the females were smaller, but the individual young at birth were larger than before. This study is considered convincing evidence of so-called rapid evolution.