The Gustav Kiepenheuer publishing house was from 1909 to 2010 existing German book publisher. 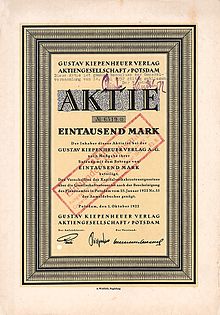 Share over 1000 marks in Gustav Kiepenheuer Verlag AG from October 1, 1922

The bookseller Gustav Kiepenheuer , a classmate of Ernst Rowohlt and Kurt Wolff , took over the court, book, art and music business from Ludwig Thelemann in Weimar in 1909 and at the same time founded a publishing house under his name. The first publisher titles tied in with the Weimar Classic , such as Back then in Weimar (1910) and Das Leben in Alt-Weimar by Wilhelm Bode (1912), or the two-volume work Das nachklassische Weimar by Adelheid von Schorn (1911–12). The publisher gained a reputation among book lovers through the bibliophile book series “ Lovers' Library” . In the following years works and magazines on the fine arts were published and the series Deutsche Orient-Bücherei (1915) was launched.

The magazine Das Kunstblatt first appeared in 1917 . 1918 began the publication of the series of "graphic books", with the illustrations of young artists to texts of the literary heritage as original graphics should be made available to a larger group of readers. In 1919 the publishing house moved to Potsdam . André Gide , Bert Brecht , George Bernard Shaw , Lion Feuchtwanger , Hans Henny Jahnn , Arnold Zweig and Anna Seghers joined as authors , who stood for a left-wing bourgeois program. Zweig's dispute over Sergeant Grisha (1927) was the most successful book in early publishing history. Hermann Kesten became a publisher's editor and in-house author in 1928.

After moving to Berlin again in 1929, Gottfried Benn , Marieluise Fleißer and Joseph Roth could also be won; with this, a large part of the fiction writers elite published their works with Kiepenheuer between the world wars.

When the National Socialists took power in 1933, 75% of publishing production in Germany was banned, Kesten and co-owner and managing director Fritz Helmut Landshoff continued the publishing work in the Amsterdam exile publishers Allert de Lange and Querido . In 1936 the Kiepenheuer library collection was created , containing travel descriptions, philosophical texts as well as letters and statements by ancient and modern poets. The Kiepenheuer Verlag in Leipzig later re-established the series. The Berlin headquarters was completely closed in 1944 by order of the Reich Chamber of Literature.

A year after the end of the war, the publishing house was re-established in Weimar, and Joseph Caspar Witsch became a partner and managing director in 1948. Gustav Kiepenheuer died in 1949 after a long illness, his widow Noa Kiepenheuer initially continued the publishing house. In 1951, following a change in the majority, there was a split: In the west, Witsch founded the Kiepenheuer & Witsch publishing house, initially located in Hagen and later in Cologne. In 1969 the publisher Reinhold Neven DuMont , Witsch's son-in-law, acquired the company.

In the east, Kiepenheuer Verlag was continued by Noa Kiepenheuer until her death in 1971, then by Friedemann Berger in Weimar. In 1977 he was sold to the children's book publisher . This was followed by a merger with Insel Verlag Leipzig, Dieterich'schen Verlagsbuchhandlung and Paul List Verlag to form the Kiepenheuer publishing group based in Leipzig. The editorial activity moved almost exclusively in the area of ​​classical world literature , cultural history, the European avant-garde of the beginning of the century as well as oriental philosophy and literature.

The archive of the Gustav Kiepenheuer Verlag in Leipzig and the Leipzig part of the Dieterich'schen Verlagbuchhandlung , consisting of “Annual reports (n); Meeting minutes; Author correspondence with Lion Feuchtwanger , Hermann Hesse , Victor Klemperer , Oskar Kokoschka , Joachim Ringelnatz , Carl Zuckmayer , Stefan Heym , among others ; Proofreading reports; Publishing contract (s); Publishing history; Kiepenheuer family records (and) photos ”, was placed as a nationally valuable archive under the protection of cultural property in accordance with the Hague Convention for the Protection of Cultural Property in the Event of Armed Conflict . The archive material has been on deposit in the Saxon State Archives in Leipzig since 1996 .