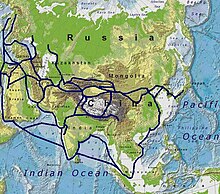 Hội An (English: quiet community or peaceful meeting place ) is a coastal city in central Vietnam ( Annam ) with around 75,000 inhabitants. It is located on the South China Sea in the province of Quảng Nam at the mouth of the Sông Thu Bồn, about 30 km south of Đà Nẵng .

Hội An was once the largest port in Southeast Asia , it was on the Silk Road . Among the Cham , the city was called Lâm Ấp Phố (Champa City), later Hài Phố (place by the sea) and among the French, due to a misunderstanding, Faifo . The name Hội An first appeared on a map in 1630.

The city was founded in the 4th century by the Cham, with whose retreat it lost its importance. Under the rule of Nguyễn Hoảng (1558–1622) and his son Nguyễn Phúc Nguyễn (1623–1634) the port was opened to the outside world. Numerous merchant families from China and Japan settled here, whose countries had officially sealed themselves off at the end of the 15th century and had their goods transhipped in foreign ports. Its proximity to China made Hội An suitable for Japanese ships that needed a permit called Shuinsen and could reach the port in 40 days during the northeast monsoon. At that time the city was divided into two parts, the Japanese families lived across the Japanese bridge (Chùa Cầu).

When foreign trade was finally banned in Japan in 1635, the importance of the port changed again. At that time, European trading branches were established in Hội An: the English East India Company in 1613 , the Dutch Vereenigde Oostindische Compagnie in 1636 and the French Compagnie des Indes Orientales in 1644 . In parallel, Indians, Portuguese, Dutch and French settled down. The business success of the companies was, however, modest, so that they soon withdrew. When the Ming dynasty in Beijing was overthrown by the Manchurian Qing in 1644 , countless Chinese fled to Southeast Asia and practically took over Hội An.

With the increasing siltation of the port, the ever larger merchant ships had to move to the port of Đà N .ng. Therefore, Hội An lost more and more importance in the 18th century. During the Tây-Sơn rebellion, the city was largely destroyed in 1780. It was rebuilt, but in 1888 the French colonial powers declared Đà Nẵng to be the capital of Annam , and the railway was built past Hội An in 1930.

However, the city owes its decline to the preservation of the historical cityscape. In addition, the old town is the only one that remained intact during the Vietnam War . The old town was declared a World Heritage Site by UNESCO in 1999 because it is a well-preserved example of a Southeast Asian trading port dating from the 15th century . 19th and 19th centuries , the buildings of which show a fusion of local and foreign influences, especially in the style of small towns in southern China.

The purchase of a flat-rate ticket for đ 120,000 (as of January 1, 2015) includes admission to five attractions. So can u. a. three Chinese assembly halls, four old houses (e.g. with a traditional pharmacy ) and the Japanese bridge or the Quan Công Miếu (Temple of Quan Công) can be visited. The flat-rate ticket also entitles you to visit one of the three museums as well as a concert with traditional music or an arts and crafts workshop.

H Außerdemi An is also the starting point for the ruined city of Mỹ Sơn, which has also been declared a World Heritage Site by UNESCO and is about 50 km to the west .

Commons : Hoi An  - collection of pictures, videos and audio files