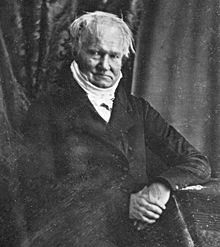 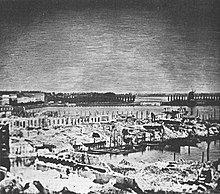 The destruction of the Hamburg fire of 1842 on Jungfernstieg and Kleiner Alster. View from the roof of the stock exchange towards the Lombard Bridge.

Biow, who is believed to be the son of the painter Raphael Biow (1771-1836), initially worked as a painter and writer. He "... didn't want to share any biographical transcripts of himself.", As read in the "Lexicon of Hamburg writers". Biow had probably lived in Hamburg for a while before turning to the daguerreotype. In July 1837 he arrived in Hamburg from Breslau. In 1838 he published a biographical sketch about the violinist Ole Bull in Altona. Two more texts were published in the same year by the "Herold'schen Buchhandlung", whose owners, like Biow, came from Breslau. Biow also wrote anonymous theater reviews in the "Orginalien". These were the last years of Friedrich Ludwig Schmidt , known beyond the borders of Hamburg, as theater director at the Stadt-Theater .

One month after the publication of Daguerre's patent in August 1839, there was an article in issues No. 29 of the Allgemeine Poytechnischen Journal of September 14 and No. 30 of September 21, 1839 under the title: "The Daguerrotype and Liepmann's Oelbilderdruck" the procedure presented in detail. The publisher and main editor was Johannes Andreas Romberg (1806–1868), who lived in Hamburg and who in 1835 presented a design for a polytechnic school. Romberg had Ludwig Wilhelm Anthes printed in Hamburg. Just two months later, in October 1839, the mechanic Rudolph Koppel succeeded in producing daguerreotypes in Hamburg. Interestingly, in his essay “The Daguerreotype in Hamburg” Wilhelm Weimar made no considerations or assumptions as to where and how Hermann Biow was made familiar with the handling of the daguerreotype. Towards the end of 1839, the first daguerreotypes from Paris were exhibited in the Spiro brothers' art shop in the Bleichenbrücke and at the optician Edmund Gabory.

Hermann Biow opened his studio in Altona on September 15, 1841 . From May 1843 Biow's studio was in Neuen Wall 24 (later 52). In Wilhelm Weimar's report on Hermann Biow, only sparse information can be found about the premises of his studio in Neuer Wall / corner of Bleichenbrücke. Weimar did mention Biow's advertisement of May 12, 1843 about the opening of “my newly built daguerreotype studio”, but made no mention of the structural measures that had been taken. Rüdiger Articus referred to a contemporary lithograph by Charles Fuchs , which depicted the newly constructed four-story building with a flat roof. Weimar also never described the location at which the recordings were to be made. A successful daguerreotype presupposed that sufficient daylight of constant intensity was available over a period of approx. 3 minutes. Such conditions were most likely to be found on the roof of a house or in the open (garden). Articus suspected that it was a "glass and greenhouse" in appearance. A notice in an advertisement that “on colder foggy days the lighting effect is better than clear sunshine” may indicate that daguerreotyping was carried out on the roof. A curtain as a background and a chair with a table were sufficient for decoration. The term “studio” could therefore initially have been used to name the rooms in which all further necessary work had taken place (quote: “The studio is unchanged; ... above the optical shop of Mr. Campbell's successors.”)

From September 1842 to the end of March 1843, Biow worked with the photographer Carl Ferdinand Stelzner in the dagurreotype studio Caffamacherreihe 32. From 1845 he trained his sister Jenny Bossard-Biow as a daguerreotypist . From 1846 he went on a trip to Germany. In July he announced his return. During his absence, his sister took over the management of the studio. In 1849 he founded a new studio in Dresden. Hermann Biow died in Dresden in 1850 at the age of 40 or 45 of a liver disease, which may be due to inhaling mercury vapor during the production of the daguerreotypes.

After Hermann Biow's death, according to the address book entry, the “daguerreotypist” Peter Wilhelm Drenckhahn claimed to be “Biow's successor”. It remained with one entry. In October 1852, the former officer of the Schleswig-Holstein army , August Mencke, took over the premises and reported it as the "Photographic Institute". In 1856 the former captain Carl von Zeska took over the studio for a few years. Until 1898, photographers can be identified at the address "Neuer Wall 52".

Biow became known during his lifetime for his portrait photography . He portrayed politicians, celebrities and wealthy citizens, including Franz Liszt , Alexander von Humboldt and Friedrich Wilhelm IV. He is also known for his portraits of parliamentarians of the first German National Assembly in the Paulskirche in Frankfurt in 1848/49.

Today Biow is mainly seen as the founder of German documentary photography. After the great Hamburg fire , in May 1842 he made a series of daguerreotypes of the ruins of the fire. He offered it to the Association for Hamburg History for sale, which, however, considered the cost to be too high. With the exception of three records in Hamburg's museums, the whereabouts are unknown today.

Unlike many of his contemporaries, Biow also experimented with large-format pictures (up to 32 × 26 cm).

Wikisource: originals from the realm of truth, art, whimsy and fantasy  - sources and full texts