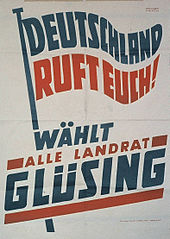 After attending secondary school and training in agriculture, Glüsing, who was an evangelical believer, had been an independent farmer since 1937 . From 1940 to 1945 he took part in the Second World War as a soldier. After the war he was appointed district farmer manager in the Norderdithmarschen district.

From November 16, 1948 to April 13, 1950, Glüsing was District Administrator of the then Norderdithmarschen district.