Digger wasp ( Ectemnius lapidarius ) from the front. The adults feed on pollen and nectar. 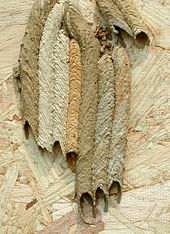 Brood tubes of Trypoxylon from the family Crabronidae

The digger wasps (Spheciformes) are hymenoptera from the suborder of the stinging voices . They are very closely related to bees , but this relationship cannot be recognized at first glance, but was only discovered in 1872 through application of Darwin's theory of evolution . Similarities that distinguish digger wasps and bees from the other stinging voices lie in the structure of the thorax : The pro notum , that is the back part of the (narrow) first breast segment, forms typical thickenings in its rear corners and does not reach the wing scales that cover the wing joint.

The digger wasps live individually and have strong jaws , which are suitable for digging due to the strongly developed upper jaw . Only from the tropical genus Microstigmus , as well as a few non-European species of the genera Arpactophilus and Spilomena are eusoziale species known.

The digger wasps are a very diverse group: the size ranges from two millimeters to several centimeters. Many species are marked in yellow to varying degrees; some have a red abdomen base. Many species have a stalked abdomen, which means that the first abdomen segment is designed as a long, thin stalk (petiolus). Almost 10,000 species have been described worldwide, around 300 of which are known from Central Europe. The digger wasps include the common sand wasp , the spinning wasp and the beewolf . Because of the metallic shimmering hair on the front of the head, some digger wasps are called "silver mouth wasps".

During which adult animals from flower nectar and pollen to feed, which are larvae of the grave wasps of the females depending on the type of insects , insect larvae or spiders supplied. The females paralyze their prey with one sting. These are then carried as host or food supply for the larvae into self-dug (or in bricked) cavities and each covered with an egg. Some digger wasps also live in galls stung by plants caused by straw flies .

From an evolutionary perspective, the sometimes very complex brood care behavior (multi-nests / multi-phase brood care of some digger wasp species) must have arisen through certain intermediate steps. As a starting point that can Rezentbeispiel some parasitic wasps are cited which put the egg on or in the prey, but otherwise leave this unchecked. Some dagger wasps show a continuation of this behavior, paralyzing the prey with a sting, but leaving it in its place (which is usually quite hidden). The next advanced behavior is shown by some wasps who actively hide the paralyzed prey. Finally, the digger wasps create a special space for the prey; only then does the hunt begin. This behavior allows (in coordination with the size of the prey animals) the entry of several prey organisms into a hiding place. In such a hiding place several brood cells, which branch off (labor-saving) from only one feed passage, can be created, as is the case with the locust sand wasp ( Sphex funerarius ).

Dean Wooldridge describes in his work Mechanical Man: The Physical Basis of Intelligent Life (1968) that the digger wasp Sphex ichneumoneus drops the prey next to the entrance of the hiding place after a successful hunt, in order to then inspect the hiding place and then deposit the prey in it and that Egg to lay. If an observer moves the prey animal by even a few centimeters, the digger wasp, after leaving the hiding place, first places the prey animal back in the previous place in order to then inspect the hiding place again. This behavioral stereotype of Sphex was already described in detail by Jean Henri Fabre . It can be induced as often as desired without the digger wasp learning or dulling it. In his book Metamagicum , Douglas R. Hofstadter gives this example to develop the term sphexishness (sometimes translated as “sphexity”), which he then uses to explain self-reflection .

In a superfamily “Sphecoidea”, the digger wasps (Sphecidae) and the bees (Apidae) were initially compared as sister groups (or two superfamilies Sphecoidea and Apoidea). With the principles of cladistics , however, the perspective changed. The digger wasps were recognized as a paraphyletic group and split into four families, which together with the family of bees (Apidae i. W. S.) are combined to form the superfamily Apoidea. The different way of life of the bees, which supply their larvae with pollen, and the adapted morphology are derived characteristics, the digger wasps as a whole are only characterized by the lack of these characteristics. The Spheciformes comprise the following groups:

The oldest fossil evidence of this group is known from Baltic amber ( Eocene ). These include mainly representatives from the Crabronidae family . The biodiversity in Baltic amber suggests that this group emerged much earlier. Cretaceous finds from North America cannot be clearly assigned taxonomically.

The digger wasps Polemistus chewbacca and Polemistus vaderi were named by Menke and Vincent in 1983 after their Star Wars characters.