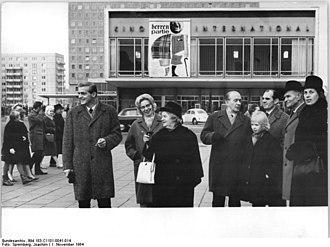 Herrenpartie is a German-Yugoslavian feature film from 1964 by director Wolfgang Staudte . The film is a mixture of political satire and fate tragedy.

A German men's choir takes a bus to the popular holiday destination of Yugoslavia. When they run out of gas, they come to a remote village inhabited exclusively by women. The women don't give them gasoline or water against the heat.

The search for gasoline and water comes to a standstill in a ravine, as the Wehrmacht had blown up the bridge to save it during the war. But the German male choir is tough. They settle down in the abandoned village pension with old soldiers' songs. By posting an announcement from the time of the German occupation, the women declare their continued hatred of the German petty bourgeoisie. The order shows that all of the male residents of the village were shot in retaliation during World War II.

The situation comes to a head when the men “ requisition ” a sheep and slaughter it.

Then, at the request of their spokesperson Miroslava, the women plunge the German bus into a ravine. Miroslava also tries to kill the Germans with a blast when they try to make their way to the next village. She refrains from doing so, as she would endanger a girl in the village who ran after the Germans.

In this tense situation (as in previous scenes) the entanglement of the men in the machinations of the Third Reich and their current dependencies become apparent. Only the young Herbert, who, together with the journalist of the troops, is the only one who has no Nazi past, can understand the suffering of the villagers.

After the men have climbed up in the mountains, they are saved by the women. Miroslava, who does not agree with this rescue operation, then wants to shoot the men on their return, but refrains from doing so at the last moment.

In the final scenes, when the Yugoslav police and a replacement bus have arrived, Miroslava is preparing to be arrested for the destruction of the coach that rolled into the ravine. But the journalist blackmailed his fellow travelers because of their Nazi past, which has now come to light, and the Germans explain the loss of the bus through their own fault.

Shooting started on October 6, 1963, in Njeguši in Montenegro. The world premiere took place on February 27, 1964 in Cologne.

“Oscillating between political satire and fate tragedy, the superbly played film is a remarkable contribution to the unresolved past of both peoples. No less interesting is the look at the history of the reception of the film at that time, which was defamed as "bad nest pollution " and ended Staudte's career in cinema as a committed social critic. "

“While the value of some of the Staudte films that were initially strongly rejected is beyond question today ( the subject even adorns a postage stamp from the Federal Post Office), opinions about men's part are still divided today. For me it is an extremely successful film. It is demanding in terms of content, formally interesting and a successful experiment in terms of the conditions in which it was created.

The film, shot in Yugoslavia in 1963, took part in the 1964 Berlinale competition, but did not receive any awards. The two Yugoslav actresses Mira Stupica and Nevenka Benković were each awarded the German Film Prize in gold for their performance .

In 1964 the film was invited to the Cannes Film Festival as an official contribution, but the government of the Federal Republic of Germany rejected this request.

Acrobat schö-ö-ö-n | I dreamed of you | The man whose name was stolen | The girl Juanita | The murderers are among us | The strange adventures of Mr. Fridolin B. | Rotation | Second hand fate | Five girls and one man | The subject | Poison in the zoo (unnamed) | The story of little Muck | Beacon | ( Mother Courage and her children ) | Ciske - a child needs love | Rose Bernd | Madeleine and the Legionnaire | Cannon Serenade | The muzzle | Roses for the prosecutor | Fun fair | The last witness | The rebellion | The happy years of the Thorwalds | The Threepenny Opera | Men's game | The lamb | The case of Captain Behrens | Crook honor | The class | Secrets | The gazebo | The gentlemen in the white waistcoat | The sea wolf | The person | Escape route St. Pauli - major alarm for the Davidswache | Marya Sklodowska-Curie - A girl who changed the world | Treason is not a board game | Mink at night by the roadside | Crime scene: the dead do not need an apartment | A happy existence | Lehmann's stories | Locker 763 | Call of gold | Richer by two experiences | Trial of Medusa | Crime Scene: Two Lives | The lost Inca gold | Firewater | Crime scene: late harvest | Intermediate track | Crime scene: The bullet in the body | The iron Gustav | Crime scene: Gunfire | Crime scene: Have a nice weekend | Satan is on God's side | Crime scene: fair game | The snob