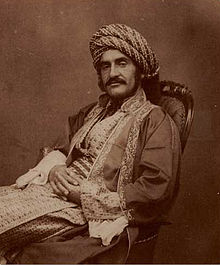 Hormuzd Rassam in Mosul (around 1854)

Hormuzd Rassam (* 1826 in Mosul ; † September 16, 1910 in Hove ) was an Assyriologist and traveler who made a number of important discoveries. These included u. a. the clay tablets of the Epic of Gilgamesh .

Rassam was an ethnic Syrian and was born in Mosul , Ottoman Empire as a Chaldean Catholic into a mixed cultural milieu. His father Anton Rassam came from Mosul and was archdeacon in the Assyrian Church of the East . His mother Theresa was the daughter of Ishaak Halabee from Aleppo ( Syria ).

At the age of 20 he was hired by the British archaeologist Austen Henry Layard as paymaster on a nearby archaeological site. Layard, who undertook his first expedition in Mosul (1845–1847), was impressed by the hardworking Rassam and took him under his wing. They stayed friends all their lives. Layard offered Rassam the opportunity to travel to England and study in Oxford at ( Magdalen College ), where he stayed for 18 months. He then accompanied Layard on his second expedition to Iraq (1849-1851).

Layard then started a political career, while Rassam continued field work in Nimrud and Ninive between 1852 and 1854 , where he made a number of important and independent discoveries. These included clay tablets that were later deciphered by George Smith as the Gilgamesh Epic , the oldest known example of written literature.

Rassam then returned to England and, with the help of his friend Layard, began a career in government with a post at the British Consulate in Aden . An international crisis broke out in Ethiopia in 1866 when British missionaries were taken hostage by Emperor Theodore II . Hoping to resolve the situation peacefully, Rassam was sent out as ambassador with a message from Queen Victoria . However, he was also captured and held for a number of years until English and Indian forces under Robert Napier defeated the warlord and his army in the British expedition to Ethiopia of 1868 . Rassam's reputation was damaged afterwards because he was portrayed as weak and unsuitable in negotiations with the warlord, which was largely due to the Victorian prejudices against "Orientals".

With his political career in tatters, Rassam continued his archaeological work. He was sent to Assyria by the British Museum , where he conducted important research, particularly in Nineveh . During the Russo-Turkish War , he carried out an investigation into the situation of Christian communities in Asia Minor and Armenia . His archaeological work resulted in many important discoveries and the collection of valuable epigraphic evidence. In 1879 he made sure that a fragment of a stele of Adad-nīrārī III found in Tell Schech Hamad . came to the British Museum in London.

From 1882 Rassam lived mainly in Brighton , where he wrote about the Assyrian-Babylonian exploration of Christian sects of the Middle East and about contemporary religious controversies in England. He was a member of the Royal Geographical Society , the Society of Biblical Archeology, and the Victoria Institute .

One of his greatest discoveries was the clay tablets containing the Epic of Gilgamesh , the oldest literary work in the world. He also found the Cyrus cylinder made of baked clay, which is considered to be the first human rights declaration made by Cyrus the Great in 539 BC. BC and is due to the Persian conquest of Babylon . Rassam's important discoveries received worldwide attention and the Royal Academy in Turin awarded him the Brazza Prize for 12,000 francs for the years 1879–1882.

Rassam married Anne Eliza Price, an Englishwoman, and had seven children. His eldest daughter Theresa Rassam , born in 1871, was a professional singer. She sang with the D'Oyly Carte Opera Company .