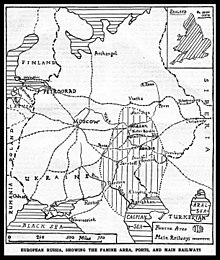 The Russian famine of 1921-1922 , also known as Volga region -Hungersnot was a severe famine in Soviet Russia demanded that five million lives. The regions on the Volga and Urals were mainly affected by the famine, which began in spring 1921 and lasted until the end of 1922 .

The famine arose as a result of the economic repercussions of the First World War and the multi-year civil war in connection with the politics of war communism , especially the Prodrasvjorstka campaign (food recruitment ). A poor rail network contributed to the aggravation of the food situation because food could not be distributed efficiently.

One of the periodically recurring droughts in Russian history turned the situation into a national catastrophe. The famine was so severe that it was questionable whether seeds were not eaten rather than actually sown. For a time, aid organizations had to provide the railway workers with seeds so that deliveries could even be transported.

Before the famine broke out, Russia had already suffered six and a half years from the First World War and the civil war .

All sides of the civil war - Bolsheviks , the White Movement , the Anarchists , the secessionist movements of various peoples - stocked up on food before the famine by confiscating it from the peasants. The Bolshevik government demanded supplies from the peasants for little or no consideration. This policy led to a sharp decline in crop production. According to the official position of the Bolsheviks, still shared by some modern Marxists, the rich peasants ( kulaks ) kept their surplus of grain in order to save their lives. According to statistics, most of the grain, as well as other food supplies, were traded on the black market. The Bolsheviks believed that the peasants had tried to undermine the war effort. The Communist Black Book claims that Lenin ordered the confiscation of the food farmers grew for their own livelihoods and their seeds in retaliation for this "sabotage", which led to widespread peasant uprisings. In 1920 Lenin had placed more emphasis on the confiscation of food from the peasants.

Outside help was initially refused. The American Relief Administration (ARA), which Herbert Hoover founded to provide food for the victims of World War I, offered aid to Lenin in 1919 on the condition that he had full access to the Russian rail network and that he could distribute food to all without reservation on. Lenin initially refused this offer on the grounds that it would interfere in Russia's internal affairs.

Lenin was finally convinced by several events (the famine, the Kronstadt sailors' uprising , the peasant uprising of Tambov , as well as the failure of a German general strike ) to rethink his domestic and foreign policy and on March 15, 1921, he adopted the " New Economic Policy ". The famine helped to open up Russia: Lenin finally allowed aid organizations to bring aid into the country. War aid in Western Europe was no longer necessary and the ARA had set up an aid organization to fight the Polish famine that broke out in the winter of 1919–1920. 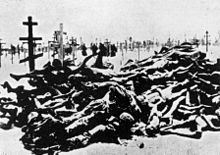 Famine victims in Buzuluk , near Saratov 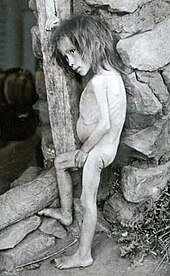 A starving boy from the village of Blahovishchenka (1921/22)

Although no official request for help was published, a group of well-known people without obvious party affiliations were allowed to start an appeal for help. In July 1921, the author Maxim Gorky published an appeal in which he wrote that millions of lives were threatened by crop failure. At a conference in Geneva on August 15, organized by the International Committee of the Red Cross and the League of Red Cross Societies , the International Committee for Russian Relief (ICRR) was established with Fridtjof Nansen as High Commissioner. Nansen traveled to Moscow , where he signed a contract with Soviet Foreign Minister Georgi Chicherin that gave the ICRR full control over its actions. Since Nansen saw no private organization in a position to carry out the huge relief operation required from its own resources, he asked the League of Nations for a grant of £ 30 million in September  and earned suspicion, indeed, from those who viewed hunger as God's blow against the Bolsheviks considered even hostility. The subject was postponed to a meeting of the Supreme Council of the Allies in October, after which the League of Nations declined any aid to Soviet Russia. A fundraising campaign had already started in the UK, including everything needed for modern day relief - newspaper ads, local fundraisers and a short film made in the affected area. The first relief load, which contained 600 tons of relief supplies, was shipped from London in September 1921. The first care center was opened in Saratov in October .

In addition to Hoover's American Relief Administration, the main actors in the international relief effort included the American Friends Service Committee and the International Save the Children Union with the British Save the Children Fund as the main donor. Approximately 10 million people were provided with food, the majority of which came from the ARA, funded by the United States Congress . The European agencies, which were coordinated by the ICRR, cared for 2 million people every day: At its peak, the International Save the Children Union cared for around 375,000 people in its centers in Saratov. The action was dangerous - many of the workers died of cholera - and met with criticism, including from the London Daily Express , which first denied the severity of the famine and then argued that the money could be better used to eradicate poverty in the UK should.

After the Soviet leadership failed at the Genoa Conference to persuade the West to enter into trade deals or borrowing or obtaining credit, the only way to get foreign currency was to export grain. On November 6, 1922, the local ARA director, William N. Haskell , received a message from Foreign Commissioner Kamenev that the plan was to export $ 50 million worth of grain. This was severely condemned by the ARA in a telegram - the blame for the death of millions of people would then fall on the government authorities - but there was no threat of ending their own aid operation. After the unpopular forced evictions in 1920-21, the Soviet government could not risk demanding grain from the farmers without a corresponding consideration. The ARA relief service in Russia ultimately adopted the Soviet position on the export of grain.

As with other major famines, there are several estimates of the number of victims. According to an official Soviet publication in the early 1920s, around 5 million people died as a result of the famine in 1921 alone. This number is commonly quoted in textbooks. Other, more conservative sources do not exceed a million and an estimate by the ARA Medical Division put it at 2 million victims. On the other hand, witnesses spoke of 10 million victims. According to Bertrand Patenaude , such a figure does not seem excessive when compared to the many millions of victims of war, famine and terror in the 20th century.

The famine arose after six and a half years of violence and unrest (first World War I, then two Russian revolutions in 1917, then the Russian Civil War). Many different political and military groups were involved in these events and were accused by their opponents of contributing to or causing the famine.

In his secret letter to the Politburo, Lenin stated that the famine would provide an opportunity to take action against the Church. Richard Pipes claimed that the famine was used by the Bolsheviks as an excuse to persecute the Orthodox Church, which had significant influence over most of the peasantry.

Russian anti-Bolshevik exiles in London, Paris and elsewhere used the famine as a media opportunity to highlight the injustices of the Soviet regime and tried to prevent trade with and official recognition of the Bolshevik government.