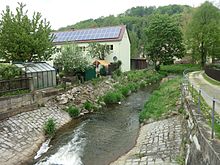 The Hutberg is a 371 meter high knoll in the Großschönau basin and knoll country in eastern Upper Lusatia in the Free State of Saxony . The wooded mountain rises opposite the center of Großschönau and the confluence of the Lausur above the Mandau valley . On the local mountain of Großschönau festivals were celebrated since the end of the 18th century; the Hutbergbaude , opened in 1878, is the center of cultural life in the town. The Lichten Plan in front of the hut offers a view of the town center with the church in front of the panorama of the Lusatian Mountains with the peaks of Lausche , Weberberg and Tollenstein .

The name of the mountain, which is common in Upper Lusatia , suggests that it was originally used for guarding . The mountain was one of the corridors of the Großschönau manor, which Hertwig von Nostitz sold to the Zittau council in 1587 .

The oldest news about a folk festival on the Hutberg comes from May 1779, when the Großschönau residents celebrated the Peace of Teschen on the mountain . On the occasion of the celebration of the birth of Prince Friedrich August , the Hutberg was illuminated in 1797. The return of King Friedrich August I from Prussian captivity was celebrated in Großschönau in 1815 with a festival lift to the illuminated and decorated Hutberg and fireworks. Three years later the 50th anniversary of the king's throne was celebrated with a folk festival on the mountain. On the mountain a 15 ells high pyramid with 700 lights shone, patriotic songs were heard; mortar volleys and fireworks were also fired.

In 1876 a committee for the purchase of the Hutberg was formed by the city of Zittau, chaired by the master damask weaver Ernst Heinrich Paul. The project found a strong supporter in the Zittau city councilor David Goldberg, who was born at the foot of the mountain. The taxation identified 10,264 trees with a trunk thickness of at least 3 inches. The community bought the mountain for 12,000 marks , of which 5216 marks could be raised by collecting donations from the residents. On April 1, 1877, the Hutberg was handed over to the community of Großschönau. A little later, the butcher Friedrich Frenzel began building an inn on the mountain. The Hutbergbaude opened in 1878.

Around 1880 a concert pavilion was built near the building. The Kaiserhain was laid out in 1889 by the Hutberg Association. In honor of Theodor Körner and gymnastics father Jahn , the association planted two oaks. After the Hutberg Association was dissolved, the horticultural committee of the Großschönau community took over the maintenance of the facilities.

In 1889 the "Kaiserhain" social area was inaugurated with a bust of Wilhelm I. In 1892 busts of Chancellor Otto von Bismarck and Field Marshal Helmuth von Moltke were added. The poet of the Wars of Liberation Theodor Körner and the gymnastics father Ludwig Jahn were honored by planting oaks named after them. In 1912 the paths on Hutberg were illuminated. In 1923, the Hutberg Association ceased operations due to inflation. The horticultural committee of the community took care of the Hutberg. In the course of time the Knöselgrotto, the fire department grotto, the Krausebrunnen and the witch's house were built. In the spring of 2010 a new panorama plate was created on the clear plan.

The Hutberg Association, which emerged from the committee for the purchase of the Hutberg, took care of the beautification of the mountain and invested more than 21,000 marks in the first two decades after the purchase of the mountain. A large part of this sum was raised through sponsorship. The local associations and wagon owners supported the Hutberg association with unpaid work. In 1892, for example, 260 loads were brought in. Results of the association's work were u. a. the establishment of the imperial grove and the planting of the grain and Jahnlinde. As a result of the loss of assets due to inflation, the association dissolved in 1923. 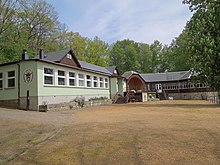 In 1877 the butcher Friedrich Frenzel started building an inn southwest of the Hutberg summit. The Hutbergbaude, which opened in 1878, was initially only open seasonally from April to October. Around 1880 she was given a billiard room. After a major expansion of the building, a year-round restaurant was possible from 1885. In 1899 the restaurant was connected to the gas supply. After the death of Hutberg host Frenzel, his widow continued to run the building from 1900. In 1906 a water pipe was built on the Hutberg. In 1910 the widow Frenzel sold the building to the community and the tenant Hermann Hänsel managed it. In 1914 there was another expansion to include a music hall, a veranda and a kitchen extension. During the renovation in 1925, contemporary toilets and a connection from the old to the new veranda were created. The glass veranda and the adjoining guest rooms were enlarged in 1934. From 1921 the restaurant was leased to Gustav Tampe, after his death his daughter-in-law ran the business from 1941 to 1947. This was followed by a period of high fluctuation in the landlords of the building, which had meanwhile been transferred to the consumer cooperative .

In 1971 the love couple leased the hut mountain chalet. The Grußschönau carnival club, founded in 1973, used the Hutbergbaude for its events from 1974 and converted a basement room into a club bar. Thanks to the Hutberg Carnival , which enjoyed a very good reputation in the Zittau district , the Hutbergbaude became known far beyond the borders of Großschönau.

In 1989 the Zittau consumer cooperative began the urgently needed reconstruction of the building. Due to the turning point after the fall of the Wall, the consumer cooperative broke off construction work in 1990 and gave up the restaurant. After the building was transferred back to the municipality, the municipality searched unsuccessfully for an investor. The associated vacancy and vandalism severely damaged the building fabric.

In 1996 the Großschönau Carnival Club decided to take over the ruins as a club house. After the temporary restoration of the media connections and the sealing of the roof, a trumpet concert took place on the Christmas tree on the Lichten Plan on the 4th of Advent. This was intended to send the residents a sign of the end of the Sleeping Beauty slumber on the Hutberg, which has been going on since 1989, and to encourage them to become unselfish, as in the days of the Hutberg Association. After the repair of the beer garden, other events followed.

The building was renovated as part of a one-year funding measure with 24 employees and numerous volunteers. Since then it has been managed by the Grußschinner carnival club. The hut is protected as a cultural monument.

The ceremonial inauguration of the Kaiserhains created by the Hutberg Association with a bust of Wilhelm I took place in 1889. Three years later, this was accompanied by two busts of Otto von Bismarck and Helmuth Karl Bernhard von Moltke . The three monuments were destroyed in 1946, the enclosure was preserved.