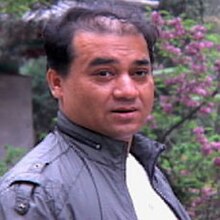 Tohti graduated from the Pedagogical University in Northeast China in Changchun , Province Jilin in Manchuria , and then went to Beijing , where he attended the Faculty of Economics of the Nationalities University Central taught.

Ilham Tohti is married to Guzelnur for the second time. He has a daughter, Ilham, from his first marriage and two sons.

Persecution as a critic of the regime

In 2006 Tohti founded the website UyghurOnline.com with the purpose of creating a better relationship and understanding between Han Chinese and Uyghurs. In 2008, the Chinese authorities shut down this website, which Radio Free Asia in the US has called "a modern, intellectual website for social issues".

In a radio interview in March 2009, Tohti criticized the Chinese government's policy in Xinjiang, particularly the settlement policy with regard to the Han Chinese. This policy exacerbates the problem of unemployment among the Uyghurs. He also criticized the governor of Xinjiang, Nur Bekri , as "unqualified" and demanded that Xinjiang implement the law on regional autonomy .

Tohti took the position that Uyghur activists in Xinjiang and international terrorist groups such as Al-Qaeda have no connection and that the Chinese government and media are using the fight against terrorism as a reason to attack the minorities more strongly.

Tohti was arrested in March 2009 and interrogated several times on charges of supporting separatist efforts. After unrest broke out in Urumqi , capital of Xinjiang, among Han Chinese and Uyghurs, killing more than 150 people in early July 2009 , Governor Bekri claimed that the re-active website UyghurOnline had provoked the events. Tohti was arrested again. The writers and bloggers Wang Lixiong and Tsering Woeser published a petition asking for his release on their blog. On July 14, 2009, more than 250 Han Chinese and representatives of ethnic minorities such as blogger Ran Yunfei , a member of the Tu minority , had already signed the petition requesting that Tohti be released. A total of 397 people from 30 countries signed the petition. Tohti was released in August 2009. His freedom of travel and that of his family members remained restricted.

On January 15, 2014, Ilham Tohti and his mother were arrested in Beijing. His home was ransacked and his computer and phone were confiscated. On September 23, 2014, the Urumqi Intermediate People's Court sentenced him to life imprisonment after two days of trial for “separatism” and confiscated his property. His defense attorney appealed unsuccessfully.

In 2019 Tohti received the European Parliament's Sakharov Prize ; his daughter accepted the award on behalf of the company.