Infestissumam ( lat. : Superlative most hostile ) is the second studio album by Swedish heavy metal - band Ghost . It was released on April 10, 2013 through Loma Vista Recordings in North America and in the rest of the world through Universal Music Group . It was produced and mixed by Nick Raskulinecz from his studio in Nashville , Tennessee . 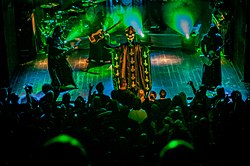 On December 15, 2012 Papa Emeritus handed over the vocal microphone to a (also anonymous) successor at a concert in Linköping, Sweden, who introduced himself with “Io sono Papa Emeritus secondo” (Italian: “I am Papa Emeritus II”). Then Ghost played a new song called Secular Haze , which was released on December 20, 2012 via an official Ghost website as the first single of the second album as a preview version for listening.

The album was released on CD , vinyl and mp3 download . In North America the album was distributed by Loma Vista Recordings under the band name Ghost BC (before Christ), as there was already another band called Ghost in the USA and they claimed their rights to the name. A published Deluxe Edition received three additional titles: the song La Mantra Mori , a song cover of I'm a Marionette by the group ABBA and a live version of Secular Haze . The album, released in Japan, was similar to the Deluxe Edition , but instead of the live version of Secular Haze , the album features a song cover of Waiting for the Night by Depeche Mode .

The cover is borrowed from the movie poster for the 1984 film Amadeus . Papa Emeritus II spreads his arms over an ancient city. A baby lies on straw in a kind of coliseum. A rising or setting sun is depicted in the background. The name of the band is shown above Papa Emeritus II's head.