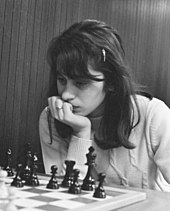 The 1973 women's interzonal tournament in Menorca was a chess tournament .

The women's interzonal tournament took place in Menorca in September / October 1973 . Valentina Kozlovskaya was the first and qualified directly for the women's candidates' tournament. The next four placed had to play a play-off, with Natalia Konopleva eliminated. The Candidates Tournament was won by Nana Alexandria.

The playoff for three starting places in the candidate competitions took place in February and March 1974 in Kislovodsk .