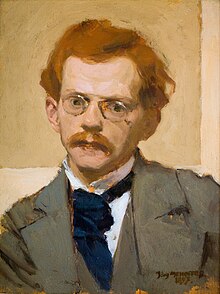 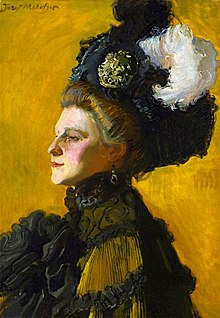 Jadwiga Janakowska, wife of the artist (1907)

Józef Mehoffer (born March 19, 1869 in Ropczyce , Austria-Hungary ; died June 8, 1946 in Wadowice ) was a Polish painter and graphic artist and one of the leading exponents of Young Poland .

Mehoffer came from a family of Austrian officials. He studied painting at the Art Academy in Krakow , a. a. with Jan Matejko , also at the University and Academy in Vienna and in Paris at the Académie Colarossi and the École des Beaux-Arts . His preferred methods included art graphics, easel painting, chalk drawings, autolithographs, etchings, etc. He painted numerous portraits, often of people in historical costumes, created theater decorations, furniture and much more. He was also active in the field of applied arts. He made a variety of book covers, bookplates and other decorations, created posters, watermarks and created templates for banknotes. 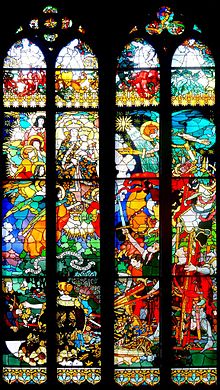 Mehoffer became famous for his church windows , in which he combined elements of medieval painting with those of the Viennese secession . The 13 windows he designed in Art Nouveau style for St. Nikolaus Cathedral in Freiburg im Üechtland , which were built between 1895 and 1936, are particularly well-known . Together with Stanisław Wyspiański and Jan Matejko, he designed windows for St. Mary's Church in Kraków . Mehoffer also created wall paintings, for example in the Armenian cathedral in Lviv , in the treasury on the Kraków Wawel and in the church of Turek .

In 1909 he bought a manor in Jankówka , where he founded a park (shown in the picture The red umbrella ).

His Kraków home, the Józef Mehoffer House , was dedicated to him as a museum and is now a branch of the Kraków National Museum . A memorial was erected for him in Turek; the life-size sculpture shows him sitting on a bench. He is also the winner of the “Golden Laurel of the Polish Academy of Literature ”.