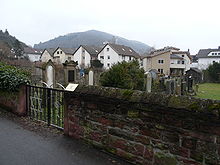 Entrance to the Jewish cemetery in Schriesheim

In March 1931 a member of the Hitler Youth and a member of the SA knocked over two gravestones in the cemetery and damaged another gravestone. The SA member was sentenced to 14 days in prison. During the Nazi era , the cemetery remained unused and neglected after the last Jewish faith from Schriesheim moved away in September 1939. The Reich Association of Jews in Germany had owned the property since May 1942 . Negotiations between the city of Schriesheim and the Baden Ministry of Economics about the purchase of the cemetery failed because the city considered the purchase price to be too high.

After the liberation , the property was taken over by the Jewish Restitution Successor Organization in January 1950 . The city of Schriesheim carries out the care and maintenance work in coordination with the Upper Council of the Israelites of Baden . In February 2004 a memorial stone was unveiled in the cemetery , commemorating nine Jews from Schriesheim who were deported to the Gurs camp in southern France in October 1940 in the so-called Wagner-Bürckel campaign .

A Won the Schriesheimer district near the present highway entrance is called "Jewish Cemetery"; There is no evidence of the presumed existence of an older Jewish cemetery in Schriesheim. 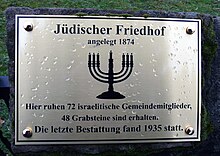 Badge at the entrance

Jewish cemeteries in Heidelberg , Mannheim and in the Rhein-Neckar district