Johann Caspar Harkort VI. (* January 22, 1817 in Haus Harkorten near Hagen in Westphalia ; † October 13, 1896 there ) was a pioneer of German large bridge construction. He set milestones in the history of railway bridge construction, groundbreaking steel constructions for the rapidly growing railway traffic after the signing of the German Customs Union in 1838 and the emerging industrialization. He was best known for the implementation of pioneering engineering achievements, steel constructions, such as the rotunda on the occasion of the World Exhibition in Vienna in 1873 or the " Roter Sand " lighthouse in 1885 in the German Bight. 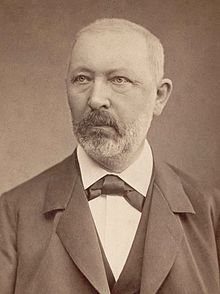 Johann Caspar Harkort VI. in the early days of the German Empire

Eider Bridge near Friedrichsstadt, swing bridge with two openings of 27 m each, built in 1883 .

Johann Caspar Harkort VI. attended the trade school in Hagen and then the trade school in Leipzig . During this time he practiced in the trading and export company Carl and Gustav Harkort , which had branches in Norway, the USA and China and mainly sold English yarns. Throughout his life he maintained an intimate relationship with his uncle Gustav Harkort in particular . His extensive experience as a co-founder of Leipzig's first public limited company in 1836 , chairman of the Leipzig-Dresden Railway Compagnie ( 1835 to 1865 ) and co-founder of the Allgemeine Deutsche Credit-Anstalt in 1856 ( director until 1865 ) always provided him with valuable help in his own ventures.

Johann Caspar Harkort VI. recognized during this time the development opportunities of traffic and thus also of the construction of large bridges. However, at the beginning, i.e. at the beginning of the German Customs Union from 1834 , the responsibility of the respective German state was the sole responsibility of the respective German state , in workshops specially built on site.

After completing his military service, he joined his father's business, the Johan Caspar Harkort company, at the end of the 1940s . The first bridge construction ( 1846 ) was the bridge over the Wupper in Rittershausen. It had a total length of approx. 31.40 m, clear width of the two superstructures each approx. 14 m; it was the first privately built bridge. This was followed by the Ruhr Bridge near Werden (approx. 119 m long) and the single-track railway bridge over the Rhine near Koblenz.

For logistical and capacity reasons, Johann Caspar Harkort VI relocated . the majority of the "bridge construction" production branch of the machine factory on Harkorten then on the Rhine to Duisburg-Hochfeld . There in 1860 , right next to the Vulkan hut, he acquired a piece of land directly on the banks of the Rhine and founded the " Johann Caspar Harkort Bridge Construction Company ". In this way, the company was able to take on larger iron constructions and load even the heaviest pieces directly into Rhine barges in order to move them from there for the waterways, which were still essential for freight traffic at the time .

In the 1860s he still worked in a division of labor with Kölnische Maschinenbau AG . Johann Caspar Harkort VI. received the reputation of the largest and most efficient bridge building company of the time. From then on, his company was to deal with the buildings that were to be carried out in quick succession. From 1864 onwards the design and construction of larger bridges abroad began, namely in Holland (over the Yssel near Zütphen), Russia, Austria and in more distant European and overseas countries, namely in Portugal and Java.

Johann Caspar Harkort VI. used as one of the first fluent iron (Bessemer process) and rolled steel for bridge construction. In 1871 he took over the production of all the buildings for the Vienna World Exhibition, including the famous rotunda. This dome had a free width of 100 m, a height of 85.3 m and a steel weight of 7570 tons.

After the death of his only son JC Harkort VII and his son-in-law and first engineer Willibald Liebe (both † in March 1871 ), he separated the bridge construction company from the assets of the Johan Caspar Harkort company and on August 1, 1872, the " Aktiengesellschaft für Eisenindustrie und Bridge building (formerly Johann Caspar Harkort in Duisburg ) "- Postal address: Harkort company, Duisburg, to be founded.

Johann Caspar Harkort VI. placed particular emphasis on the correct technical development of its constructions. Great care was taken consistently in the technical office. So it came about that the company was able to establish a new bridge system on the market around 1884 , the so-called Harkort articulated bridges . In 1885 the company was able to deliver 34 such articulated bridges with a span of 18–32 m to Sumatra.

The school question, especially as far as it concerns the commercial education system in Westphalia, was his special interest beyond his profession.

1872 : For his services to the realization of Prussian steel constructions, Emperor Wilhelm I awarded him the 3rd KL. awarded.

1873 : For his services to the realization of the Viennese Rotunda he received from Emperor Franz Josef I the award of the Commander's Cross from the Austrian Order of the Iron Crown. With the award of the Order of the Iron Crown , the elevation to the hereditary knighthood is connected. JC Harkort VI. did not cause a stir about this award during his lifetime and had the order returned to the Austrian court after his death in 1896 .

1883 Appointment as mayor of the community

1884 Appointment as a volunteer in Westerbauer near Hagen.

as well as many others in Europe, Asia, Africa and South America.