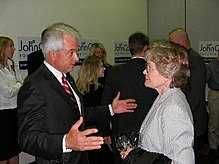 Cox at the 2007 Lincoln Day Dinner in Des Moines

John Herman Cox (born July 15, 1955 in Chicago , Illinois ) is an American businessman, talk show host and Republican politician . He ran unsuccessfully in the party primary for the 2008 presidential election and ran for various other offices and mandates in Illinois. In 2018 he applied for governor of California to no avail .

His mother Priscilla worked as a teacher, his stepfather Thomas Cox as a postal worker. John Cox graduated with a BA in Political Science and Accounting from the University of Illinois . In 1980 he obtained a Juris Doctor from the Chicago-Kent College of Law . From 1980 he worked as a lawyer for the law firm Coopers and Lybrand and started his own business in 1981 with John H. Cox and Associates , which specialized in corporate and tax law. In 1985 he founded the Cox Financial Group and in 1995 an Equity Property Management , a real estate company that developed housing in Indiana , Kentucky and Illinois. In 2018, Cox estimated the value of his stake in the company to be around $ 200 million. He also hosted a conservative radio talk show. In 2011, Cox moved to Rancho Santa Fe in San Diego County, Southern California .

The Catholic Cox is married to Sarah Hall. You have four daughters.

For the 2000 election , Cox ran in the Republican area code for the 10th congressional constituency of Illinois and failed at that time against Mark Kirk as well as in the area code for the local seat in the United States Senate in the 2002 election . He also lost the election for Recorder of deeds in Cook County in 2004. On March 9, 2006, he was the first Republican to announce his candidacy for the 2008 presidential election , received 0.29 percent in the Iowa Republican Straw Poll in November 2007 and in the Primarys and caucuses of 2008 a total of 3,351 votes (0.02 percent).

After moving to California, Cox initially campaigned for popular legislation such as the 2015 proposal he introduced to have politicians - like athletes - wear the badges of their respective most important sponsors on their clothing. As of 2016, he tried several times to increase the number of members of the State Legislature from 120 to 12,000. None of his initiatives received enough support votes to appear on the ballot paper on election day .

In the Republican area code for the election of the Governor of California in 2018, Cox ran again and received a tweet from President Donald Trump in mid-May 2018 . In the area code on June 5, 2018, Cox received the second-highest number of votes after Democratic Lieutenant Governor Gavin Newsom with around 26 percent and received relative majorities in the interior of the country as well as in Orange County and San Diego County. Unlike in most states, since 2012 the primary elections in California no longer take place separately by party, but all applicants are on a voting slip. In the main election, the two candidates with the strongest vote meet, regardless of party affiliation. As a result, Cox ran against Newsom in the actual gubernatorial election on November 6, 2018, but clearly lost the vote with just over 40% of the vote. Meanwhile, just over 59% of California's voters voted for Newsom.

His chances against Newsom in this strongly democratic federal state were seen as slim anyway, especially since, unlike former republican officials like Arnold Schwarzenegger , he takes strongly conservative positions on socio-political ( pro-life ) and issues of immigration and border protection. In other socio-political issues, Cox is considered to be moderate and in particular to be fiscally strict, economically oriented and well-versed in political issues. In the 2018 election campaign, he primarily addressed the sharp rise in the cost of living in California and tried to distance himself from President Trump, who was unpopular there. His remark, which compared queues at the vehicle registration authority with the Holocaust, caused outrage, but Politico described his other demeanor as sober and thoughtful.