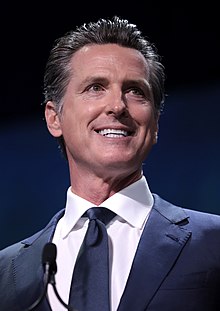 Gavin Christopher Newsom (* 10. October 1967 in San Francisco , California ) is an American politician of the Democratic Party , and since January 7, 2019 Governor of California . He had previously been Lieutenant Governor of that state from 2011 . He served as Mayor of San Francisco from 2004 to 2011 .

Newsom as a city councilor in 1999

Newsom's great grandfather immigrated to the United States from Ireland in 1865 . Both of Gavin Newsom's parents were judges in California.

Newsom attended Redwood High School, graduating in 1985. He graduated from Santa Clara University in 1989 with a bachelor's degree in political science . 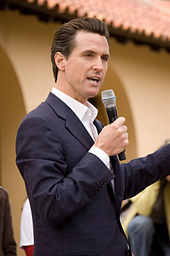 Gavin Newsom at Stanford University in 2008

Newsom became famous outside the United States in 2004 when it opened marriage to gays and lesbians in San Francisco. Many thousands of couples got married. These weddings were later declared invalid by the courts. The ban on gay marriages across California was later declared unconstitutional . 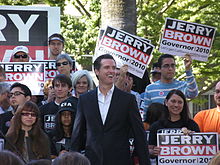 Newsom on an election campaign appearance in October 2010

Newsom initially sought the Democratic Party's candidacy for the California gubernatorial elections in 2010, but withdrew his application on October 30, 2009. Subsequently, he announced a candidacy for lieutenant governor . On November 2, 2010, he was elected Lieutenant Governor of California. Unlike in most American states, the California lieutenant governor is elected independently of the governor and not together as a team. He defeated the Republican incumbent Abel Maldonado with 50 versus 39 percent of the votes cast by a clear margin. He took office on January 10, 2011, a week after Governor Jerry Brown . The reason was that he wanted to fulfill his duties as mayor until his successor had been determined by the San Francisco Board of Supervisors . Ed Lee became the new mayor of San Francisco .

Gavin Newsom announced in September 2012 that he would run for the Democratic gubernatorial candidacy in 2014 if the 76-year-old incumbent Jerry Brown does not run for re-election. In the case of Brown's rejection, he was considered one of the most promising candidates for the highest office in the US West Coast state. However, Newsom also announced that it would back Governor Brown and seek re-election as Lieutenant Governor should Brown run for another term.

However, after Brown announced another candidacy for governorship in February 2014, Newsom ran for a second term as lieutenant governor in November 2014. He won the primary on June 3, 2014 by a clear margin. On election day, Newsom won with around 57.2 percent of the vote, well over Republican Ron Nehring , who had 42.8 percent. On January 5, 2015, he therefore took on a further term as deputy to the re-elected Governor Jerry Brown.

On February 11, 2015, it was announced that Newsom was planning to run for governorship in 2018. As early as January 13 of that year, Newsom announced that it did not want to run for the successor to Barbara Boxer in the US Senate in the November 2016 election after Boxer announced her withdrawal. Previously, Newsom had been traded as a possible candidate for the office. His waiver came in connection with the announced candidacy of Kamala Harris , Attorney General of California since 2011 . Newsom said he would support his party colleague's bid, while Harris, in turn, supported Newsom's bid for governor and entered the US Senate on January 3, 2017.

In the primaries on June 5, 2018, Newsom received the most votes by a clear margin with around 34%, ahead of Republican candidate John H. Cox . Unlike in most states, since 2012 the primary elections in California no longer take place separately by party, but all applicants are on a voting slip. In the main election, the two candidates with the strongest vote meet, regardless of party affiliation. As a result, Newsom ran against Cox in the November 6, 2018 gubernatorial election. In the democratic state, Newsom was the clear favorite against the ideologically right-wing Cox.

On November 6th, Gavin Newsom was elected as the new governor of California with 61.8% of the vote. It received over 7.3 million votes in absolute terms, more than ever been cast for a candidate for governor in the United States. Cox got 38.2% of the vote, which corresponds to around 4.5 million voters. In addition to California's rank as the most populous US state, the main reason for Newsom's record vote is the comparatively high voter turnout in the 2018 US elections.Cox also received almost 100,000 more votes in absolute terms than Governor Brown in his re-election in 2014, which he received with 60 % clearly decided for themselves. Newsom's 61.8% share of the vote is also the highest victory in a California gubernatorial election since 1950.

Gavin Newsom at the California Democratic Party Conference in June 2019

Gavin Newsom was sworn in as the 40th Governor of California on January 7, 2019. He succeeded Jerry Brown , who could not run again in the 2018 gubernatorial election, but actively supported him in the election campaign. His party colleague Eleni Kounalakis was elected as Newsom's successor in the lieutenant governor's office, making her the first woman to take up this post. Newsom has a two-thirds majority of its party in both houses of the State Legislature .

On March 13, 2019, Newsom announced that it had placed a moratorium on the death penalty and preventing any execution in the state while he is still in office as governor. "Our system of the death penalty has been a failure in all respects," Newsom said. "Deliberately killing another person is wrong."

On June 18, 2019, Newsom publicly apologized in his capacity as Governor of the State of California for the genocide of California's Native Americans and set up a commission to deal with the relationship with California's Native Americans . At the ceremony he said: “It is a shameful admission for me that until now I thought I was an educated person and yet knew so little about our past. (...) (The systematic slaughter) was genocide. There is no other word for it. "

Newsom advocates same-sex marriage, abortion rights, universal health insurance, the legalization of marijuana, strict gun laws, and the rights of immigrants, including those without legal residence status. He is an opponent of the death penalty. 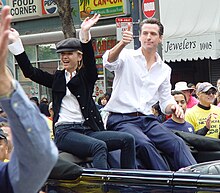 In February 2007, Newsom announced that he had alcoholism . In connection with this, he stated that he was seeking medical treatment, which was successfully completed a few months later.