Goodwin was the son of Jess and Lille Knight. The family moved from Utah to Los Angeles at an early age . The father worked as an engineer in the mining industry, but the son followed in the footsteps of his maternal grandfather, who was a judge. After elementary school he studied at Stanford University and later at Cornell University , in between he served in the US Navy during the First World War. In order to earn money he also worked at times as a journalist, as a goods seller and even in mining.

In 1935, Governor Frank Merriam appointed him district judge in Los Angeles. In this role, he often had to deal with Hollywood stars. In November 1946 he was elected lieutenant governor as a member of the Republican Party . Unlike most US states, this election was separate from that of the governor, although both were elected at the same time. He took up his new post as Deputy Governor Earl Warren in January 1947. On November 7, 1950, Knight was confirmed in this office. In January 1951 one was sworn in for a second term.

President Dwight D. Eisenhower offered Governor Warren the appointment of Chief Federal Justice in the fall of 1953 after that position became vacant after the death of Fred M. Vinson . Warren accepted the president's offer and resigned on October 5, 1953 after serving twelve years in office. This automatically promoted Knight to governor for the remainder of the current term. Since Knight, like his predecessor, belonged to the moderate to liberal wing of his party, he essentially continued the previous government policy. With the approval of the State Legislature , he appointed Harold J. Powers as the new lieutenant governor, who retained this post after the next election in late 1954.

The Republicans nominated Knight as their candidate for the regular gubernatorial election in the summer of 1954. On November 2, 1954, Knight defeated the Democrat Richard P. Graves with 56.8 percent of the vote. Only 43 percent of California's voters were in favor of his opponent. In January 1955 he began a full term as head of government of the west coast state. After his confirmation in office, Knight campaigned for water conservation and prison reform. 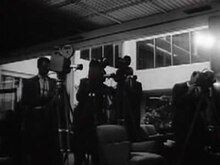 When the next gubernatorial election was imminent in 1958, Knight sought further confirmation in the office of governor. It was all the more surprising when, at the beginning of the year, his Republican party colleague, US Senator William F. Knowland , also declared his intention to run for the highest office in California and thus not be re-elected in the Senate . Knight accused Knowland of wanting to abuse the governorship only as a stepping stone to be able to distinguish himself for the Republican presidential candidacy in 1960. At that time, an internal party struggle for the leadership of the California Republicans between Knowland, Knight and Vice President Nixon had broken out, all three of whom were said to have ambitions for the presidency. A compromise was later found for the 1958 elections, which President Eisenhower also supported: Knowland would be nominated as his party's candidate for governorship, while Knight would run for the vacant Senate mandate. A venture that Republicans have dubbed the “Big Switch”. In the elections in November of that year, which were generally characterized by poor general conditions for the Republicans, Knight then clearly lost the intended Senate entry against the Democrat Clair Engle . Knowland also had to admit defeat to his democratic opponent Pat Brown . The biggest beneficiary of these elections was Richard Nixon, whose path to the presidential candidacy in 1960 was decisively paved by the defeats of his two competitors.

On January 5, 1959, then replaced the Democrat Pat Brown Knight in the governorship. To this day, Knight is the last California lieutenant governor who had to replace the governor due to the early departure of the governor during the current term of office.

Governor Knight opened the Disneyland Resort in Anaheim on July 17, 1955 , which today is one of the most visited leisure complexes in the world.

After Knight was more or less pushed out of office by his competitors, he withdrew into private life. In the 1964 presidential election he unsuccessfully supported the liberal Nelson Rockefeller , who fought internally with the arch-conservative Barry Goldwater for the presidential nomination and lost. On May 22, 1970, Knight died of pneumonia in Inglewood at the age of 73 .

He was married twice. His first wife Arville, with whom he had two daughters, died in October 1952. In August 1954, he married Virginia Carlson (1918-2010), the widow of an officer who had fallen in the war, in his second marriage. This marriage remained childless. After Frank Merriam in 1936, Knight was the second and to date last California governor to marry during his tenure.