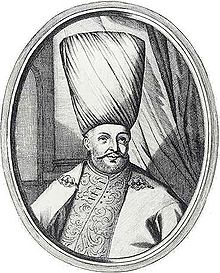 Köprülü Fazıl Ahmed Pasha , Fazil , dt. The highly educated (* 1635 in Köprü today Vezirköprü / Anatolia ; † 3. November 1676 in Constantinople Opel ) was Grand Vizier of the Ottoman Empire . His family was of Albanian descent, Köprülü is the Turkish form of Qyprili.

Fâzıl Ahmed was the eldest son of the Grand Vizier Köprülü Mehmed Pascha . At the age of 16 he already became professor ( müderris ) with Kara Çelebizâde 'Aziz Efendi at a medrese . From 1659 he was vizier and governor of Erzurum and from 1660 of Damascus . In this position he led successful battles against the Druze and in June 1661 ( Islamic calendar : Zilka'de 1071 ) became his father's deputy ( Kaymakam ). After his death on October 31, 1661 (7th Rebî'ülevvel 1072) he was appointed Grand Vizier by Sultan Mehmed IV . It was the first time since the Chanderelis that a son succeeded his father in this office. He reduced taxation and particularly took action against illegal tax collections.

In 1663 and 1664 he led a campaign against the Habsburg part of Hungary . After conquering several fortresses (including Neu-Zrin in northern Croatia), he suffered a defeat at the Battle of St. Gotthard and was forced to make the Treaty of Eisenburg with Austria , which, however, secured many of the Turkish conquests. The imperial general Montecuccoli was unable to take advantage of the victory because of the weaknesses of his army, so Fâzıl Ahmed Pasha's influence on the sultan remained unbroken.

The next war he waged was against Poland-Lithuania in 1672 for the requested help for the Ukrainian Cossacks under Petro Doroshenko . Initially successful in the framework of the peace at Buczacz , Ahmed Pasha was defeated by the Poles under their crown hetman Jan Sobieski in the battle of Chocim and Lemberg . On October 22, 1674 he returned to Adrianople , terminally ill (allegedly edema due to alcoholism ) . The Turks continued to hold their ground, however, and agreed to the honorable terms in the Peace of Żurawno of October 17, 1676, by which they kept the Kamieniec Podolski fortress , large parts of Podolia and southern Ukraine .

Köprülü Fâzıl Ahmed Pascha died on November 3rd, 1676 (16th Şa'bân 1087). His body was buried in his father's doorway on Divanyolu in Constantinople. He was considered learned (see his nickname), magnanimous and brave, but also a drinker . He was a generous patron of art and literature and founded a library in Constantinople that still exists today.

Ahmed Pascha's keeper of the seal Hasan Ağa wrote a diary about the two most important campaigns of his master (Crete and Hungary), which he then had edited. The editor, whose identity has not yet been clarified by literary scholarship, gave the work the title "The gems of history" ( Cevâhirü't-tevârîh ). He was possibly imam of the sultan's mosque in the castle on Ibar (in eastern Montenegro).