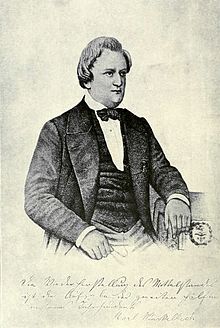 Winkelblech studied chemistry in Marburg and Gießen , completed his habilitation as a private lecturer in Marburg and in 1839 became a professor at the Higher Trade School in Kassel, where he died in 1865.

His father was a private tutor and later a pastor in Ensheim. Raised by his parents and primarily a private tutor, he would later become a pharmacist . He had a lifelong friendship with the son of his trainer Pastor Philipp Touton from Framersheim , Emil Touton (1809–1860). From 1826 to 1829 he was an apprentice in the pharmacy in Wörrstadt .

In 1829 he and his friend Touton went to study chemistry and pharmacology at the alma mater Philippina Marburg . In the same year he lost his father and mother three months apart. In 1832 he stayed for six months (one semester) in Giessen with Justus Liebig . Here he also wrote his diploma and doctoral thesis De Oxydis Cobalticis, which was later translated into Latin . In February 1835, he received a rigorosum with egregia cum laude , he received his habilitation and appointment as a private lecturer by decree of the elector . While still in Marburg, he became a member of numerous scientific societies. Promoted to associate professor in 1837 (with a salary of 150 thalers), in the two following years he broke with Ferdinand Wurzer , the founder and head of the chemistry department at Marburg University.

In 1839 he had to go to Kassel on the instructions of the Hessian Ministry - in an exchange with Robert Bunsen . Letters from the Marburg professors and Liebig's cannot change the ministry's mind. He is transferred to the higher trade school in Kassel , even if his salary is increased from 500 to 800 thalers. In 1839 only provisionally, he was not granted the full license to teach in Kassel until 1841 and he became a Hessian civil servant. On May 16, 1840, he married Emma Gerling, daughter of the professor of physics , mathematics and astronomy Christian Ludwig Gerling at the University of Marburg. The marriage resulted in the two children son Ludwig (February 7, 1841) and daughter Anna (December 4, 1846).

In the three following years Winkelblech undertook several trips, the most important of which was to be to Scandinavia in 1843. The miserable conditions of the workers in the blue paint factories in Modum induced Winkelblech to deal mainly with economic studies from then on. In 1848 he was triggered by one of the prominent participants in the revolutionary movement in Kassel and one of the leaders of the German craft and labor movement. From the end of 1848 to 49 he was a member of the state assembly for Gelnhausen , Wächtersbach , Bockenheim and Windecken . In 1852 a high treason trial was initiated against him. At the same time he was suspended from the teaching post from May to August 1853, although he was acquitted on June 30 of the charge of high treason.

As a result of his research on business and economics, he published under the pseudonym Karl Marlo a great four-volume work: studies on the organization of work or system in the world economy , in which he his State Economics ( Political Economy ) and criticism of economic liberalism explained. He defined a natural force (economic power) as a limited quantity, the share of which is subject to each individual with his individual labor power. Every person should freely dispose of a certain proportion of this natural force through his labor. He defined the earth as the common good of all people. A right to goods should be based on the proportion of their development. To this end, he developed the idea of federalism in work and tried to resolve the contrast he saw between liberalism and communism ( common property ). At the same time he propagated a state-controlled economy under strict laws to avoid monopolies . He is also seen as a utopian socialist who defined a form of state socialism . In Germany he is often seen only as a left-wing liberal pioneer of the craft and labor movement.

In 1860 his friend Touton dies, which leads Winkelblech into a serious life crisis. He needs 1860 to July 1861 psychiatric treatment in the mental hospital from March Illenau accept.

Winkelblech is buried in an honorary grave of the city of Kassel in the main cemetery.