Karl Wilhelm Becker was the son of a lawyer and wine merchant in Speyer. He completed an apprenticeship in Bordeaux in order to later take over his father's business. Around 1795 he married Maria Catharina Becker Tremelius (approx. 1778–1828). The previously existing separation of the spouses was recorded in 1818 and the marriage was divorced on January 30, 1822. At the same time, Becker opened his own wine shop in Frankfurt am Main . From 1796 at the latest, Becker was concerned with coinage . From 1798 to 1803 he had a cloth trade in Mannheim , with which he went bankrupt . Separately from his wife, he traveled to Switzerland and Northern Italy, among others, where he made contact with well-known numismatists. In Munich he had temporarily settled as an art and antiques dealer and as a goldsmith. In 1806 Becker worked as a goldsmith in Mannheim. It was there that Friedrich Creuzer noticed that he was copying Greek coins in gold, suspecting him of forging coins. Becker was never convicted of the offense during his life. In Offenbach he won the favor of Carl zu Isenburg around 1814 , who appointed him as librarian to the court councilor . Benefiting from his respected position, Becker's collection of coins, gems and paintings attracted the attention of other experts. In 1815 Johann Wolfgang von Goethe , who was considered a coin connoisseur, bought some bronze coins from him. However, he had most of his fakes sold by traders in Frankfurt.

Domenico Sestini warned in 1826 against “falsificatore oltramontano” (“foreign (foreign) forgers”), whereupon Becker described himself as an imitator of ancient coins and himself published a catalog with 296 of his “imitations”. In the same year he moved to Bad Homburg vor der Höhe, where he died impoverished in 1830. After his death, a private individual inherited his steel stamps, who used it to stamp duplicates out of lead.

There are 331 pairs of stamps handed down, which were suitable for the production of forgeries and partly invented imitations of the following originals.

A tetradrachm in the late Archaic style of the Ionian colony Siris in southern Italy , designed by Becker. Pinder number 11. Obverse of the silver coin . 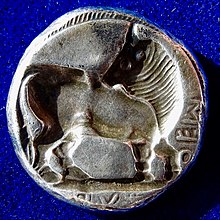 The reverse of this coin shows signs of use made by Becker.

An old copper cut from the die in Berlin's Bode Museum . Front.

The back of this Cu comparison piece.

In the Allgemeine Deutsche Biographie , Karl Wilhelm Becker was certified as having “eminent talent, great manual skill and iron industry”, with which he had succeeded in producing such a number of high-quality stamps. Anton von Steinbüchel (1790–1883) had published the first catalog for the forgeries as early as 1836. Moritz Pinder (1807–1871) published the second list of forgeries in 1843 with Die Becker's false coins on 72 pages.

In his concise dictionary of coin studies and its auxiliary sciences from 1909, Heinrich Halke attested Becker's extraordinary expertise in numismatics, which he used to create the best possible forgeries with all the means at his disposal.

Today, Becker counterfeits are traded and collected by numismatists alongside original coins.

The largest collection with a total of 550 Becker coins is located in the House of City History in Offenbach. Most of it was bequeathed to the museum by leather dealer Carl Nathan Mayer in the 1920s .