Karl came from the noble Fischer-Treuenfeld family . He was the son of Felix von Fischer-Treuenfeld (1842-1923), Reich Commissioner at the Maritime Offices in Flensburg and Tönning , and his wife Emma, ​​née Harms (1851-1919), from a Lübeck merchant and senatorial family.

During the First World War, Fischer-Treuenfeld was a staff officer under General Erich Ludendorff (1865-1937) in the headquarters in the east and in the main headquarters . For his achievements he received both classes of the Iron Cross and the Knight's Cross of the Royal House Order of Hohenzollern with Swords. In his memoirs, Ludendorff writes about him: "He is one of the few from those days who stood by my side with unchanging attachment."

Fischer-Treuenfeld married on June 5, 1919 in Hittfeld Lenore Newman (born February 7, 1901 in Hamburg ; †…), the daughter of the businessman Henry P. Newman and Maria-Louisa von Düring. The couple had a daughter and a son, who died in 1943 near Czarków during World War II . In 1957 his wife Lenore married the merchant Hans von Borries for the second time.

In 1920 Treuenfeld made the apartment of his mother-in-law Newman available to General Ludendorff in Viktoriastraße in Berlin-Tiergarten . Ludendorff introduced him to Adolf Hitler in 1922 . According to the joint plans, Fischer-Treuenfeld was to march on Berlin as head of the " Völkische Associations " of Hamburg and the surrounding area in 1923 when the Hitler putsch in Munich was successful .

Treuenfeld lived in Berlin-Dahlem and acted until Ludendorff's death on December 20, 1937 as an adjutant in his negotiations with leaders of the “Third Reich” and the Wehrmacht .

In 1929 fallierte Fischer-strewn field with his import company and expressed this in antisemitic projection 1939 in a resume, "the hatred of Jewish and Masonic business circles" have caused its failure. 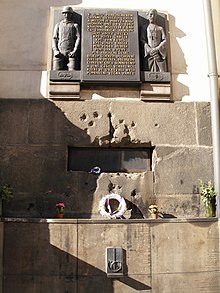 St. Cyril and Method in Prague :
Monument to the assassins killed in the church

At his request, his name was changed to "von Treuenfeld" by a resolution of the Prussian Ministry of the Interior on September 27, 1933 in Berlin.

After 1933 Treuenfeld joined the Reiter-SS , but not the NSDAP . Within the SS hierarchy , he rose to SS Brigadefuhrer and Major General. In 1941 he was the commander of the 1st SS Brigade and in the same year he became the commander of the Waffen SS Northeast. He was then commander of the Waffen SS Northwest. At the end of 1941 he became major general of the police and commander of the Waffen SS in the Protectorate of Bohemia and Moravia under the deputy Reich Protector Reinhard Heydrich . After the assassination attempt on Heydrich on May 27, 1942, it became known through treason that the assassins Gabčík and Kubiš, along with five other people involved, were hiding in the crypt of the Church of St. Cyril and Method in Prague . Treuenfeld stormed the church on June 18, 1942. After hours of defensive fighting, those wanted came before their capture by suicide .

Differences between Treuenfeld and the Gestapo led to his replacement and transfer at the end of 1942. From February to November 1943 he was in command of the Waffen-SS Russia- South and Ukraine . From November 1943 to April 1944, promoted to SS group leader and lieutenant general, he acted as commander of the 10th SS Panzer Division "Frundsberg" . He gave up this command on April 22, 1944 after being seriously wounded in the defense of Tarnopol . In mid-1944 he switched to the SS leadership in the SS main inspection office. On June 15 of the same year Treuenfeld was appointed commander of the Waffen SS in Italy .

He fell into American captivity and committed on 7 June 1946 at the POW camp Allendorf suicide .