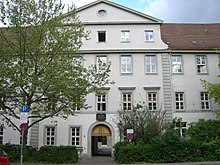 Building of the former monastery, today part of the Holbein-Gymnasium

The women's monastery St. Katharina in Augsburg in Bavaria is a former women's monastery of the Dominican Sisters in the diocese of Augsburg . The listed former monastery building (file number D-7-61-000-353) is located in Katharinengasse and Hallstrasse, two western side streets of Maximilianstrasse .

The monastery consecrated to St. Catherine of Alexandria was founded in 1243 in the suburb of Am Gries (near the Red Gate ). Christina von Wellenburg is generally accepted as the benefactor. At first it was under the spiritual direction of the Dominican monastery of St. Magdalena . In 1251 the convent moved to the city and purchased a piece of land on the site of today's Holbein high school to build a monastery . The imperial city had patronage of the monastery since 1349. In 1381 it was accepted into the Augsburg citizenship. The monastery was supported by donations from the Swabian nobility and later from Augsburg patrician families.

1498–1503, the second monastery was built according to a design by Burkhart Engelberg , the walls of which can still be found today. The nuns had the so-called basilica cycle painted for the chapter house next to the cloister , among others by Hans Burgkmair , Hans Holbein the Elder and an unknown "Master LF". (Today the basilica pictures hang in the State Gallery of Old German Masters , right next to the school.) Around 1500 Hans Holbein created a Catherine and a Sebastian altar for the monastery. In 1516/1517 the two-aisled basilica of St. Catherine was built, crowned with a turret.

During the Reformation , with the ban on the Catholic mass in Augsburg, the city council closed the church in 1534 and split the convent. The Convention had since then sovereignty of the bishop and the high pin assumed. After the Thirty Years War the monastery achieved a second heyday. In 1670 the church was made Baroque . In 1752/53 the nun Dominika Erhardt (born November 27, 1694 in Munich, † 1756 in Augsburg) wrote an extensive chronicle about the monastery.

In the course of secularization, the monastery was dissolved in 1802. The remaining 35 nuns had to finally vacate it in 1807. The church and monastery were then used as a warehouse for a long time. In 1834 the Royal Polytechnic School and a trade school (predecessor facilities of today's Augsburg University of Applied Sciences ) moved into parts of the convent building. The former monastery church has been used as the State Gallery of Old German Masters , a branch of the Bavarian State Painting Collections , since 1835 .

Today the building houses the Holbein-Gymnasium , whose predecessor institutions took over the former monastery buildings from 1877, initially as a district secondary school .

Portrait of Prioress Veronika Welser , by Hans Holbein the Elder

A prioress presided over the monastery. The conductress took care of the business management and administration. The secular bailiff represented the monastery externally. The abbots had been daughters of wealthy Augsburg patrician families since the late Middle Ages, such as the Portner , Riederer , Egen, Dachs, Langenmantel , Harscher, Ilsung , Walter and Welser .

Based on a donation to the Dominican Order dating back to 1243, the Dominican Sisters of St. Katharina in Augsburg fulfilled the condition associated with the donation and around 500 years later in 1718 sent some members of their community to Wörishofen , where the Augsburg Dominican Sisters had larger estates and held an office. The first sisters arrived there on July 24, 1718 and initially lived in an office of their order. On August 4, 1719, the feast day of St. Dominic at the time, the foundation stone of the monastery building in Wörishofen was laid. In 1721 the nuns were able to move into the monastery.

The monastery was in possession of more than thirty villages, of which there are, usually but donations in cash in kind referred. In 1264 the monastery acquired goods and bailiwick in Diedorf . The monastery succeeded in establishing its own office with the lower court over all goods. In 1357 the Altenbaindt rulership also passed to the monastery, which had been the sole landlord since the 15th century . The high jurisdiction was usually held by the bishopric or the margraviate of Burgau . With the secularization, the power of rule passed to the Electorate of Bavaria .

Hanneliese Haffner: The Dominican convent of St. Katharina in Augsburg in the 18th century , 1938