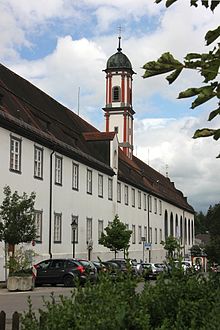 Dominican monastery in Bad Wörishofen, on the right the monastery church

The Wörishofen Abbey is a monastery of the Dominican Sisters in Bad Woerishofen in Bavaria in the diocese of Augsburg . The Kneipp Museum is set up in the east wing of the monastery .

The foundation of the Wörishofen Monastery goes back to an edition of 1243, which was connected with a donation to the Dominican order. Around 500 years later, the Dominican Sisters of St. Katharina in Augsburg fulfilled this requirement and sent members of their community to Wörishofen; the first sisters arrived here on July 24, 1718 and initially lived in an office of their order. On August 4, 1719, the feast day of St. Dominic at that time, the foundation stone of the monastery building was laid. In 1721 the nuns were able to move into the monastery.

In May 1800, French soldiers occupied the monastery and destroyed, among other things, sacred objects before it was secularized on November 29, 1802 and the property was nationalized. The sisters were allowed to stay, however, no more novices . In 1842, King Ludwig I of Bavaria ordered a new start.

The sisters in Wörishofen Monastery were originally intended to meet the wishes of Pope Clement XI. live accordingly in a strict enclosure with silence and abstention from meat dishes, which the motherhouse St. Katharina was not prepared to do. One condition for the restart was that the monastery took over the parish girls' school and set up an educational institution for girls who were difficult to educate. With this, life gradually ended in the tranquility as provided by the rules of the order.

After Pastor Sebastian Kneipp was assigned to the monastery as confessor and house chaplain in 1855, it developed steadily, built a school and boarding school, founded a household school in 1885 and a kindergarten in 1899. With his knowledge of plants and animal products, Sebastian Kneipp also improved the efficiency of monastic agriculture.

Due to a lack of young people, the number of sisters in Bad Wörishofen steadily decreased over the course of the 20th century, so that the company's own operations had to be given up. The school and boarding school building was converted into a spa house in 1981, which has been operated by the Kolping Society since 2005 as a "spa oasis in the monastery". The agriculture is leased.

"Maria, Queen of Angels" is the name of the monastery in Bad Wörishofen and the monastery church, consecrated on September 23, 1773, which closes off the northern part of the building complex to the west. The church is a rectangular baroque hall structure divided into seven bays , in the middle of which stands the high altar . The raised space behind the altar is the nurses choir; The congregation attends the service in the two-bay nave in front of the altar, while the organ is on the gallery in the western bay.

From an anteroom, the visitor enters the nave through an iron lattice door. In front of him in the choir there is an ensemble of three altars, the high altar and two side altars with fine veneer made from different types of wood, as well as boullery . The altar paintings show the coronation of Mary as Queen of Angels in the high altar - including the Wörishofen monastery - and in the side altars the death of St. Mary Magdalene on the left , and on the right the presentation of the rosary to the religious saints Dominic and Catherine of Siena . In the excerpts from the side altars, St. Catherine of Alexandria and on the right Theresa von Ávila , reformer of the Carmelite Order , are shown.

Three columns each on the left and right of the high altar flank the altarpiece in a gilded frame, above which a shield surrounded by small angels with the monogram of Mary forms the top. The pillars are supported by large angel figures. Other angels hover around the central altarpiece and indicate Mary as the “Queen of Angels” and protector of the monastery. The statue on the left between the columns represents Pope Pius V , the sculpture on the right St. Antonius Pierozzi (1389–1459), Archbishop of Florence. The small wooden sculpture above the tabernacle shows the pelican , who tears its chest and uses the blood to nourish its young or bring them back to life - a symbol of Jesus who sacrificed himself for humanity.

The high altar, side altars and all other carvings are the work of the cabinet maker Valentin Zindter from the Dominican monastery in Augsburg and his assistants. Franz Haagen painted the altarpieces.

The stucco on the ceiling and walls was created by Dominikus Zimmermann , younger brother of Johann Baptist Zimmermann , who painted the eight large frescoes . Four of these pictures adorn the ceiling of the nurses' choir, which is not accessible to visitors to the church. The painting above the choir shows - similar to the altarpiece - the Virgin Mary as Queen, surrounded by saints of the Dominican order. To the west, in the nave, depictions of the Holy Trinity and the Archangel Michael , who plunges Lucifer into hell with his angels , and above the organ, a picture of heavenly music.

Frescoes by an unknown master in the spandrels of the vault illustrate the secrets or additions in the Hail Mary of the Rosary . The small, monochrome green pictures between the large frescoes capture moments in the history of the order.

The paintings on the south wall of the nave show the Holy Family with the Holy Spirit in the form of a dove and the Dominican Margaret of Città di Castello and, next to the pulpit, St. Margaret of Hungary . Below are pictures of St. Thomas Aquinas and St. Leonhard of Limoges . Saint Wendelin and Saint Raimund von Penyafort are depicted on the north wall .

In the southwest, the Marienkapelle is attached to the monastery church, where the faithful ask for the intercession of the Mother of God and light small sacrificial candles in front of the Black Madonna . The Madonna is a statue in late Gothic style, which is said to be a copy of the miraculous image in Einsiedeln Monastery , which a sister named Maria Michaela Gonaien brought to Wörishofen in 1721. Other sculptures in the chapel are a late medieval pietà and a figure with a textile robe, similar to the Infant Jesus of Prague .

After a fire in the chapel in 1955, in which the Black Madonna could be saved, the room was redesigned. Among other things, Sister Donatilla von Eckardt (1903–1988) painted the ceiling as a flower and plant canopy.