The copper shadow hummingbird or hermit hummingbird ( Glaucis aeneus ) is a species of bird from the hummingbird family (Trochilidae) found in Honduras , Nicaragua , Costa Rica , Panama , Colombia and Ecuador . The IUCN assesses the population as Least Concern . The species is considered to be monotypical .

The copper shadow hummingbird gets its nectar from heliconias, for example . Small arthropods , which he collects buzzing, are also part of his diet. He finds these in secondary vegetation. He often preyed on them from cobwebs or from leaves and branches. Most of the time it hunts the insects in flight.

The singing consists of a light-sounding, decreasing measure of tsii-tsii-tsi-tsitstitsi sounds. He extends this irregularly with a series of high-pitched siii tones. The flight song consists of a bright tsiit .

The breeding season in Colombia lasts from May to August, in Costa Rica from January to August. In the northeast of Costa Rica, it should even last from October to August. Reports from Panama speak of nests in June and July. Studies of the gonads in Colombia indicate activity in March and April. The nest is a cone-shaped calyx made of loose plant stalks decorated with lichen and plant material. A clutch consists of two eggs and is incubated for about 17 to 19 days. The development of the nestlings is similar to that of the red-tailed shadow hummingbird. 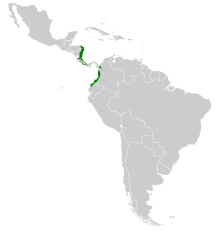 The copper shadow hummingbird prefers disturbed primary forest, dense or old secondary forest, forest edges, thickets and scrub, swamp forests and areas near rivers. Probably he likes a slightly open habitat in contrast to other sympatric hermits. In Costa Rica it occurs at altitudes up to 750 meters and in Colombia up to 800 meters.

The copper shadow hummingbird is likely a resident bird .

Etymology and history of research

The copper shadow hummingbird was first described in 1868 by George Newbold Lawrence under the scientific name Glaucis aeneus . The type specimen was collected by Auguste Endrés (1838–1874) in Costa Rica . In 1831 Friedrich Boie introduced the new genus Glaucis . This word comes from the Greek word "glaukos γλαυκός " for "blue-gray, glauk , light green". The species name "aeneus" is derived from the Latin "aes, aeris" for "bronze, bronze-colored".