The long-tailed sylph ( Aglaiocercus coelestis ) is a species of bird from the hummingbird family (Trochilidae) that is found in Colombia and Ecuador . The IUCN classifies the population as Least Concern . 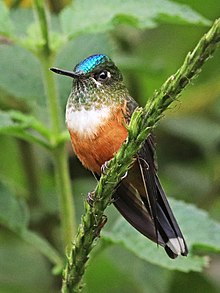 The male long-tailed sylph, including the 10 to 15 cm long outer tail feathers, reaches a body length of about 18 to 21 cm. The female is significantly smaller at 9.5 to 9.7 cm. The weight varies from approx. 4.6 to 5.5 g. The male has a short black beak. The top of the head and back shimmer green and merge into violet blue at the rump. There is a small yellow-brown white spot behind the eye. The ring collar is purple-blue, the rest of the underside is green. The elongated tail is strongly forked, shimmering predominantly metallic violet with blue tips. The female has a blue glittering skull and a whitish spot behind the eye. The throat is white with green spots. A white ribbon runs across the chest. The rest of the underside is cinnamon to fox red. The shorter bluish green tail is not bifurcated, the outer control springs have white tips. Young birds are dull green on the top, yellow-brown green on the underside. The head feathers have yellow-brown fringes.

The long-tailed sylph gets its nectar from flowering tendrils, scrub and trees. Here she prefers z. B. Plants of the genera and families of Bomarien , Clusia , heather plants , bromeliads and Inga . It often hangs on the flower crowns to absorb nectar. It catches insects in flight or collects them from the vegetation. As trapliners, both males and females regularly fly to specific, scattered flowers in quick succession. Occasionally males defend their food territory .

The breeding season for the long-tailed sylph is from October to February. The spherical nest has a side entrance and is built from moss and cobwebs in tufts of moss or epiphytes . The clutch consists of two white eggs. The incubation period is 15 to 17 days and incubation is carried out by the female. The chicks are light colored with gray back marks. The nestlings fledge at 26 to 30 days. Males and females together build the nest outside of the reproductive phase, where they rest at night. It could be why some ornithologists believed they breed all year round.

The Langschwanzsylphe is a constant series of short tones in a frequency of about 2 tones per second of himself that how psit..psit PSIT ... ... listen. The singing also includes repeated, short, beeping single and double bst or bs-srt tones or lighter, higher booming bsiii tones . You can also hear high-frequency rising and falling sii..siii..sii..sii .. tr-tr-tititi-titsi. si..si twittering from her. It probably gives off these during the hunt, similar to the black-eared hummingbird ( Adelomyia melanogenys ( Fraser , 1840)).

Distribution area of ​​the long-tailed sylph

The long-tailed sylph prefers cloud and cloud forests , forest edges, semi-open areas with scrub and trees at altitudes of 1000 to 2000 meters. Occasionally they are found a little deeper, but most of the reports come from altitudes around 1000 meters. It gets its food from near the ground to occasionally in the treetops along the edges of the forest or on paths in the interior of forests.

The long-tailed sylph is considered to be a stationary bird or a seasonal line bird, depending on the flowering season. In the La Planada Reserve in the Departamento de Nariño , where the celestial sylph is widespread in one zone , it seems to dominate in the dry season from January to April, while it is far less common there in the rainy season.

There are two known subspecies:

Lesbia kingi pseudocoelestis Simon , 1921 is considered a synonym for A. c. coelestis .

Etymology and history of research

The long-tailed sylph was first described in 1861 by John Gould under the scientific name Cynanthus coelestis . The type specimen came from Ecuador. It was not until 1930 that John Todd Zimmer introduced the new genus Aglaiocercus . This word is made up of the Greek words "aglaia ἀγλαΐα " for "shine, splendor, beauty" and "cerkos κέρκος " for "tail". The species name "coelestis" is of Latin origin and means "heavenly, glorious" from "caelum" for "heaven". »Aethereus« means »in the air, heavenly« from »aether, aetheris« for »upper, pure air« or »aithēr, aitheros αιθηρ, αιθερος « for » ether , heaven«. After all, »pseudocoelestis« is an extension of the name of the nominate form to include »pseudos ψευδος « for »false«.