Louis Braun, painting in the studio. 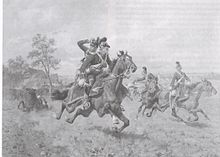 Louis Braun “Battle near Stürzelbronn ”, August 1, 1870; a very famous painting. It depicts the rescue of a Prussian hussar by the Bavarian Chevauleger Hermann Weinacht . The patriotic scene was often duplicated and also used as a postcard motif.

Louis Braun , baptized Ludwig Braun (born September 23, 1836 in Schwäbisch Hall , † February 18, 1916 in Munich ), was an art professor at the Academy of Fine Arts in Munich and a very well-known and important history painter. He is one of the most famous German military painters.

Louis Braun first studied at the Polytechnic , then at the Stuttgart Art School . In 1857 he became a member of the Corps Stauffia in Stuttgart . In 1859 he went to Paris, where he became a student of Horace Vernet , who also had a significant influence on his later work, and in 1860 to Munich.

In the German-Danish War of 1864, Louis Braun accompanied the Austrian troops. He made a series of watercolors with battle impressions and three battle pictures on behalf of Emperor Franz Joseph. Count Hunolstein, an art-loving nobleman, commissioned Braun to create a cycle of paintings on the history of his family. The painter carried out this order in Nuremberg. Here he was strongly inspired by the medieval city and also painted the "Tournament of Nuremberg", an event from the year 1496. Braun went to the theaters of war in the campaigns of 1866 and 1870–71 for study purposes and to collect impressions. He specialized more and more in military painting. On behalf of Grand Duke Friedrich Franz II of Mecklenburg, the artist produced several scenes from the fighting of the 2nd Prussian Reserve Corps of 1866, which were recognized for their "great liveliness and brisk treatment of the subject". Then Braun was commissioned to design a frieze on the town hall of Ulm . Louis Braun also made numerous paintings about events from the Franco-Prussian War of 1870/71 , partly again on behalf of the Duke of Mecklenburg, who was one of his admirers. The images in this regard were later often used in the relevant commemorative works about this armed conflict and made the artist very popular. Later he also painted a cycle of 23 pictures about the battles of the Bavarian Army from 1870–71, from their march out to their ceremonial entry into Munich. Braun's best-known war images from 1870/71 are: "Battle of Wörth", "Capitulation of Sedan", "Attack of the Württemberg cuirassiers on Mont Mesly before Paris", "Entry of the Mecklenburg troops into Orleans" and "Entry of the German army into Paris" .

Finally Louis Braun turned to the art form of monumental panorama pictures, which had just come into fashion . This genre has practically disappeared completely since the introduction of cinemas and can be seen as the forerunner of the cinema. In circular buildings, monumental paintings were attached to the surrounding wall, which had virtually no beginning and no end. Often these pictures had huge dimensions of over 100 meters in length and 10–20 meters in height, which produced gigantic and almost realistic impressions. The exhibition rotundas were usually around 15–20 m high and around 30–35 m in diameter. Inside, the visitors reached a platform in the middle of the room through a narrow corridor. Without artificial lighting, the picture was illuminated from the glass ceiling. Moving clouds or other weather phenomena could therefore greatly change or liven up the appearance of the work of art. The area between the platform and the painting was mostly filled by thematically suitable objects (weapons, preparations for animals, plants, uniform objects, etc.) in order to make the transition from two-dimensional image to three-dimensional space as inconspicuous as possible. The separation of image and space should be eliminated as far as possible in order to create the illusion of reality. The viewers were exposed to the painting from all sides and were literally involved in the action. In 1879/80 Braun painted the panorama picture “The Battle of Sedan” for Frankfurt am Main . It was 122 meters long and 15 meters high. Similar works of art - always associated with the construction of a corresponding, round exhibition hall - he produced in 1882 for Munich (“Battle of Weissenburg”), 1883 for Dresden (“Storming of St. Privat”), 1884 for Leipzig (“Cavalry attack by Mars-laTour or Bredow's death ride ”). The success of these pictures was so enormous - also from a financial point of view - that Louis Braun devoted himself almost exclusively to this profession from then on.

Braun, who had moved to Munich, set up a studio the size and shape of an exhibition rotunda for his panorama pictures on the Theresienhöhe there and employed a whole staff of painters and assistants who worked for him. The canvas for such a work of art alone weighed several tons. For the panoramas, the artist went to the original locations and gathered information like a modern reporter from the soldiers and eyewitnesses. His creations are photo reports that offer the highest level of authenticity in the presentation.

Together with his painter colleague Hans von Petersen , Louis Braun designed a large panorama of the German colonies in Munich. Braun painted the figures, Petersen, who had just come from Africa, the landscape scenes. The work succeeded in just 3 months and the 115 m long painting was first presented on December 17, 1885 in Berlin, Wilhelmstrasse, in a newly built rotunda. The monumental picture showed the German troops in Cameroon in 1884 storming an enemy-occupied hill in the midst of detailed tropical landscapes. At the end of 1887 the painting moved to Dresden, from 1889 to 1891 it was shown in Munich. As at the previous locations, the exhibition hall was decorated with exotic African plants and accessories, the influx was very strong and the exhibition remained a crowd-puller for a long time. On April 6, 1890, the Münchner Urlaubsblatt reported: “It is more and more confirmed by the increasing number of visitors from month to month that the pictorial representations from German Africa on display in the panorama met a real need for popular scientific information. “On the Easter holidays of 1890, the number of visitors exceeded the capacity of the exhibition hall due to reduced admission. Even the social democratic “ Münchener Post ” of June 10, 1890 expressed appreciation: “… the peculiar landscape captivates every visitor and also offers a lot of educational and interesting things from a scientific point of view.

With the advancing film technology, the interest in the panorama exhibitions decreased rapidly. Braun's atelier rotunda on Theresienhöhe in Munich burned down after an arson in 1915 and was not rebuilt. None of Braun's many panorama pictures are currently accessible, most of them have been completely destroyed or lost. The artist's only partially accessible monumental panorama is the “ Battle of Murten ” made in 1893/94 . The picture was in a specially built rotunda in Zurich until 1918 and was sold cheaply to the Murten community after the exhibition closed in 1919 , but was never hung there. Interested parties only got to see it rolled out in fragments; the round exhibition hall in Zurich - most recently a car garage - was demolished in 1928.

At the end of the 20th century, the value of Braun's creation was recognized and the painting was restored from 1996 to 2002. After that, in 2002, at the Swiss exhibition Expo.02 , it was shown completely again for the first time in over 80 years, but was then stored again. There are plans for a permanent construction of the attraction. There is a detailed, modern literature and a detailed website about it.

From 1889 Louis Braun was an art professor at the Munich Academy. In 10 years of work he created the illustrations for the standard military work: "The organization, clothing, equipment and armament of the Royal Bavarian Army, from 1806 to 1906". He died in 1916 and was buried in the old north cemetery in Munich. The grave is still preserved.

In Hallisch-Franconian Museum in Schwäbisch Hall Louis Brown dedicated an entire exhibition. The city also has a street named after him.

Braun's older brother, Reinhold Braun (1821–1884), also lived as a renowned painter in Munich, but was clearly overshadowed by the far more famous Louis. However, it was he who taught the later famous brother to paint in his youth. Reinhold Braun was a recognized specialist in horse representations. The passion he inherited for those animals can be clearly seen in Louis Braun's works. His horse representations are also numerous, shape most of the pictures and are always particularly expressive.

The sculptor and athlete Hanns Braun (1886–1918) was Braun's son; he died as an aviator in the First World War . A memorial plaque is attached to his father Louis Braun's grave. As a reminder of the athlete, there is Hanns-Braun-Strasse in Berlin.