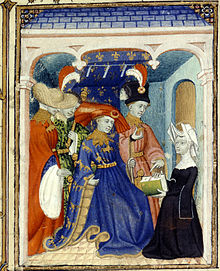 Louis of Valois, Duke of Orléans 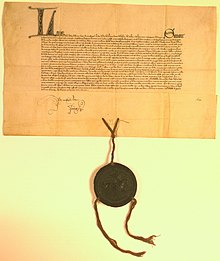 Document from Ludwig dated June 5, 1404 regarding the conditions of the marriage of his son Karl to Isabella von Valois . Paris, Archives nationales, J 359, no.26 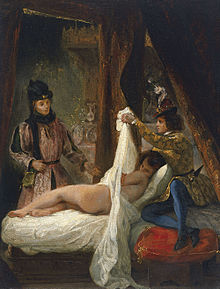 When he was young, Ludwig had a close relationship with his brother, the king, who was a good three years older and who came to the throne at twelve. He was intelligent and quite educated and worked as a patron , as he was z. B. protected the poet Eustache Deschamps . Above all, however, he was ambitious and loved the display of magnificence.

Since his brother Charles VI. from 1392 suffered from intermittent states of mental confusion, he needed a regent and / or a regency council. The former office was first assigned to the young Queen Isabeau , later de facto to her brother Ludwig , but in the 1390s power was mainly exercised by the Regency Council made up of the king's uncles, namely the dukes Ludwig von Anjou , Johann von Berry and especially the energetic and powerful Philip the Bold of Burgundy (see Government of the Dukes ). However, Louis gradually grew up to be a competitor of Philip. After he died in 1404, an open power struggle broke out between his son and successor Johann Ohnefurcht and Ludwig. He was in alliance with the queen, his sister-in-law.

At the end of November 1407, Johann Ohnefurcht had his cousin and rival Ludwig stabbed by assassins on the street and thus consolidated his position of power at court. This enabled him to evade the punishment that Ludwig's wife Valentina tried in vain to enforce before she died exhausted from an illness at the end of 1408.

To justify himself, Johann had commissioned the legal scholar Jean Petit in the same year to present the murder as tyrannical murder in a lengthy text, with arguments that were not all out of thin air in view of Ludwig's pomp and extravagance and his loose morals.

The murder of Ludwig triggered the civil war between the Armagnacs and Bourguignons a few years later . Johann Ohnefurcht himself was also murdered in the course of this, when he met (1419) on the Seine Bridge at Montereau with the Dauphin , who later became King Charles VII , for an alleged reconciliation talk.

Ludwig was betrothed to Katharina, the daughter of King Ludwig I of Hungary and Poland , as a child in 1374 , but the marriage did not take place as she died in 1378.

In 1389 he was married to Valentina Visconti , daughter of Duke Gian Galeazzo Visconti of Milan. The marriage resulted in ten children, of whom only four survived.

In addition, Ludwig also had illegitimate children. The best known was the legitimized son and later military leader Johann, Count von Dunois , who temporarily had to take over the role of the family head of the Orléans after his half-brothers Karl and Johann had been taken to England as prisoners or hostages and Philip had died young. A fictional prehistory of the Duke's murder can be found in Balzac's Contes drôlatiques ( Tolldreiste stories ) in the second series under the title "La fausse courtisane".

Commons : Louis I, Duke of Orléans  - Collection of Images, Videos, and Audio Files