Louise Pearce (born March 5, 1885 in Winchester (Massachusetts) , USA ; † August 10, 1959 in New York City , New Jersey , USA) was an American pathologist . She did research at the Rockefeller Institute and developed a drug against African sleeping sickness . She was elected the first female member of the American Society for Pharmacology and Experimental Therapeutics (ASPET) in 1915.

Pearce was the eldest child of Charles Ellis Pearce and Susan Elizabeth Hoyt. Her family moved to California, where she attended Girls Collegiate School in Los Angeles . In 1907 she received a bachelor's degree in physiology and histology from Stanford University , where she was a member of the Pi Beta Phi women's community . From 1907 to 1909 she studied at Boston University and after two years moved to the Johns Hopkins University School of Medicine in Baltimore, where she received her doctorate in 1912. She then worked for a year in the hospital and in the Phipps Psychiatric Clinic.

In 1913, Pearce became the first woman to accept a research position at the Rockefeller Institute, working as an assistant to Simon Flexner , the institute's director. She conducted research at the Rockefeller Institute from 1913 to 1951 and was promoted to associate member in 1923, but never to full member of the institute. She spent much of her time researching there with pathologist Wade Hampton Brown. 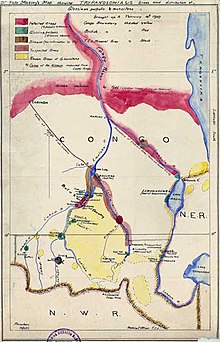 The map shows areas of trypanosomiasis in 1907 in the Belgian Congo, Africa. The map shows that the disease spread along the river banks

By 1903, researchers had found that sleeping sickness is caused by the parasite Trypanosoma , which lives and reproduces extracellularly in the blood and tissue fluids of its human hosts. It has been suggested that arsenic supplements might be useful in treating the disease, but an effective treatment has not been found.

In 1910, German chemist Paul Ehrlich discovered Salvarsan, an arsenic-based drug for syphilis, and scientists had high hopes for the development of other drugs. The First World War interrupted the supply of Salvarsan from Germany and threatened a syphilis epidemic in the United States. Flexner hired the Rockefeller Institute biochemists, Walter Abraham Jacobs and Michael Heidelberger , to make Salvarsan. He hired Pearce and Brown to test the various arsenic-based compounds that could affect sleeping sickness. The team studied the effects of more than 243 arsenics on rabbits, mice, rats, and guinea pigs. They discovered that a compound later called tryparsamide was highly effective at destroying the infectious agent that caused sleeping sickness in animals. In 1919, Pearce and Brown announced their successful results in the Journal of Experimental Medicine .

In 1920 the Rockefeller Institute sent Pearce to Léopoldville in the Belgian Congo to test tryparsamide on humans. There she worked with a local hospital and laboratory to conduct human studies to determine the safety, effectiveness and optimal dosage of tryparsamide. Almost all early cases of the previously fatal disease were treated successfully and most patients were saved in the later stages of sleeping sickness. Human studies also showed that high or repeated doses of tryparsamide can cause a side effect of other arsenic compounds, damage to the optic nerve, and loss of vision. Nevertheless, tryparsamide remained the drug of choice for chemotherapy of sleeping sickness for several decades. The compound was able to penetrate the central nervous system, making it the first drug that could be used to treat later-stage sleeping sickness. It was easy to administer, acted quickly, and healed more than 80% of patients. Later research showed that it was most effective for a variant of the disease, Trypanosoma brucei gambiense , and less so for Trypanosoma brucei rhodesiense.

Two areas from a blood smear from a patient with African trypanosomiasis (sleeping sickness). Thin blood smear with Giemsa spots. Typical trypomastigote stages (the only stages found in patients) with a posterior kinetoplast, a centrally located nucleus, an undulating membrane, and an anterior flagellum. The two Trypanosoma brucei species that cause human trypanosomiasis, T. b. gambiense and T. b. rhodesiense, cannot be distinguished morphologically.

For her work, Pearce received the Order of the Crown of Belgium in 1920 and the King Leopold II Prize of US $ 10,000 and the Royal Lion Order in 1953. Her employees were also honored for their contributions and she was elected a member of the Belgian Society for Tropical Medicine , at whose European meeting she attended from 1921 to 1939.

In 1923, Pearce was made an associate member of the Rockefeller Institute. She then focused her research on the biology and inheritance of diseases, particularly those related to syphilis and cancer . From 1920 to 1928, she and Brown studied rabbit syphilis , which is very similar to syphilis in humans. Pearce and Brown discovered Brown-Pearce carcinoma found in rabbits and successfully transplanted the carcinoma tissue to other rabbits. For decades, Brown Pearce carcinoma was the only laboratory cancer tumor available in human disease research and has been used by medical researchers around the world.

In 1929, Pearce and Brown began a selective rabbit breeding program . Together they investigated birth defects and the rabbit's genetic susceptibility to infection. Her research project was threatened when the rabbit colony suffered three rabbitpox epidemics. Finally, Pearce isolated the rabbit pox virus . In 1935 the rabbit colony was relocated from the Rockefeller Institute neighborhood to Princeton University.

By 1940, Pearce had isolated more than two dozen hereditary diseases and malformations in rabbits that had implications for the treatment of human diseases. After Brown's death in 1942, she continued this research alone. She ended the breeding program and published her results on osteopetrosis and achondroplasia . Although she published more work after her retirement in 1951, most of the remaining research was destroyed after her death. Several articles were published posthumously.

Pearce lived in Greenwich Village and shared her apartment with doctor Sara Josephine Baker and novelist IAR Wylie . All three women were active in the feminist discussion club Heterodoxy. In 1932 Wylie, Baker and Pearce moved to Trevenna Farm in New Jersey. They lived there together until Baker died in 1945. Pearce spent a lot of time in France and England. She fell ill on a ship on a return voyage from Europe in 1959 and died shortly after arriving in the United States in a New York hospital at the age of 74. Wylie died two months later. Wylie and Pearce were buried next to each other in the Henry Skillman Burying Ground on Trevenna Farm.