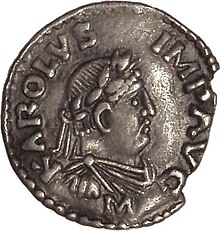 Denarius with the head of Charlemagne , inscription: KAROLVS IMP AVG for KAROLVS IMPERATOR AVGUSTUS , a silver portrait coin minted in Mainz (the M under the bust is the symbol of the mint) based on a late antique model

Medieval coins are known from different regions of the world. The European medieval coins were based on the Roman currency of antiquity. The Roman coins also received their impulses from ancient Greek coins . The Byzantine coins developed from both roots in the early Middle Ages . Islamic coins were influenced by ancient Greek and Roman coins, but as purely written coins with Arabic script and without pictorial motifs, they had a completely different appearance.

European coins of the Middle Ages

From late antiquity to the early Middle Ages , the circulation of coins in Europe declined sharply. The bartering increased and more financial transactions were often paid in bullion metal. The few coins were mostly copies of the Roman models . The coin orders of the various rulers usually only stipulated how heavy the individual coins should be; they did not change the design. In the Frankish empire and its successor empires ( France , Eastern Franconia ) the denarius or pfennig was the almost exclusively minted coin (see Carolingian coin system ). However, the originally royal minting law in the Holy Roman Empire expanded increasingly to include other secular and spiritual rulers, which resulted in a multitude of different versions of the pfennig ( regional pfennig since the 12th century) and a general reduction in the silver content of the coins. In the 10th and 11th centuries, an independent coin tradition began in Eastern Europe.

From the middle of the 12th century to the 14th century, bracteates were the predominant type of coin in almost all of the German-speaking countries (with the exception of the Rhineland) . These thin silver penny coins, embossed on one side, continued the process of weight loss of the old pennies. With the thinness of the coins, however, the diameter increased, which temporarily offered the opportunity for a more artistic design of the coin images. Images of rulers remained dominant, but other motifs also appeared increasingly. For the Thuringian landgraves, the Reiterbrakteat of the Eisenach and Gotha mints from around 1150 to 1247, minted under the Ludowingers and from 1247 to around 1290 under the Wettins after the unification of Meissen and Thuringia, is the typical pfennig coin. In the late Middle Ages , however, the design of the bracteates also deteriorated. In some Swiss cantons brakteatenartige were until the 18th century centimes , Haller and angster made. From time to time bracteates were “ disreputable ”, ie declared invalid and demanded back from the minters in order to exchange them for a smaller amount of new coins. The discount could be up to 25%. This was a common form of tax collection at the time. Since such denunciations of coins followed one another ever more quickly, there was resentment and the call for permanent money, a so-called "eternal penny" . This led to the abandonment of the bracteates.

The first European coin to show a year is a penny from Roskilde , Denmark. The coin with the year 1234 (ANNO DOMINI MCCXXXIIII) was probably issued by Bishop Niels Stigsen as a souvenir of the special sequence of numbers for the year of issue. It wasn't until 138 years later that coins with dates were minted again. The oldest dated German coins are groschen from Reinhard von Schönforst (1369–1396) from the Jungheit vor Aachen mint from 1372.

Augustal of Frederick II (minted in Messina after 1231)

Gold coins were rarely struck in the early and high Middle Ages . Among the most splendid are the Augustals of Frederick II. It was not until the 13th century that gold coins were increasingly struck. This development came from the Italian trading cities, above all Florence with the Florens and Venice with the ducats (also called Zechinen ), which were first minted in 1284 . Due to the economic influence of the cities, the coins spread quickly and many rulers took them as a model for their own minting. In France and England gold coins were more common and the individual pieces were significantly larger than in the empire. As a further development in the 13th century, the Groschen appeared in Germany as a larger silver coin. For the first time, the coin images of the groschen also increasingly showed princes of the respective territory. Overall, the artistry of the embossing increased again. Gothic style elements were evident on the coins.

The year 1356 was a decisive date in German minting law , when the emperor expressly recognized the elector's minting right with a “ Golden Bull ” . Previously, the imperial-free city of Lübeck was granted the first to mint gold guilders in 1340 . From this point in time until 1871, the history of coins in Germany was characterized by great diversity, as many countries issued their own money.

Knowledge of the significance of the coins is of great use in archaeological research, as layers excavated through the coins can be dated relatively accurately.

Here are some names that were used in the Middle Ages:

In other countries too:

Definitely no values ​​can be given, since the precious metal content fluctuated strongly when the coins were minted, i.e. in practice it decreased over time. The owners of the local minting right melted down foreign high-quality coins in order to mint their own coins with reduced fineness. The mint right holder was able to reap the difference between the silver or gold content known up to that point in time to the new lower value as a profit.

The conversion table is only intended to give an indication of the relative values ​​of the coins. Since there were a variety of currencies, there were also different conversion systems. The taler could have a value of 20 to 48 shillings or groschen, while the groschen was sometimes worth more or less than 12 pfennigs, the taler could also be equivalent to a gulden, etc.