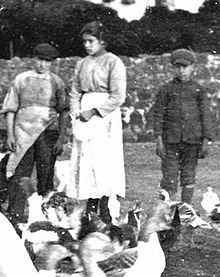 St. Maria Goretti with her family, a few months before her death, 1902

Maria Goretti (born October 16, 1890 in Corinaldo near Ancona , † July 6, 1902 in Nettuno ) is an Italian virgin and martyr . She is venerated as a saint in the Roman Catholic Church .

Maria Goretti ("Marietta") was the eldest of five children of the farmer Luigi Goretti and his wife Assunta Carlini. When Maria was nine years old, the family moved to the village of Le Ferriere near Nettuno because they could no longer live on the produce of the fields. After a year, Maria's father died of malaria . From now on, Maria and her mother were responsible for looking after their siblings. However, sixteen-year-old Alessandro Serenelli, the son of the landlord who lived in the same house, kept chasing and harassing her. On July 5, 1902, he finally tried to rape the eleven-year-old girl. Maria struggled with all her might, but finally the boy pulled out an awl and stabbed her fourteen times. Maria exclaimed several times: "That is a sin, Alessandro, you are going to hell". Seriously injured, Maria was admitted to the Nettuno hospital, where she died a day later. While she was still on her deathbed, she forgave her tormentor.

Alessandro Serenelli was sentenced to 30 years of forced labor. He reported that he became remorseful through a dream in which his victim appeared to him and gave him fourteen lilies . On Christmas 1928 he was released early from prison for good conduct and asked Mary's mother for forgiveness, which she granted him. In the monastery of the Capuchins in Macerata, he worked as a gardener and entered the Third Order of St. Francis a.

Statue of St. Maria Goretti with her saints attributes in the parish church of St. Martin in Visé (Belgium)

Maria Goretti was worshiped early on by the Italian rural population. On April 27, 1947, Pope Pius XII spoke . Blessed Maria Goretti . Her murderer Alessandro Serenelli had testified as a witness in the beatification process . The canonization of Maria Goretti took place on June 24, 1950, also by Pope Pius XII. in the presence of Mary's mother at a sensational celebration in front of half a million believers on St. Peter's Square in Rome ; it was the first canonization to take place in St. Peter's Square. In his message to the Bishop of Albano on the centenary of the death of St. Maria Goretti explained to John Paul II that the Spirit of God had given Maria Goretti the courage to remain faithful to the Christian vocation until the highest sacrifice of her life.

Maria Goretti is represented in the iconography with the attributes of virginity and martyrdom ( lily and martyr's palm ), sometimes also the attribute of her martyrdom, the awl. In 1951 Maria Goretti became the patroness of the Marian Congregations . Her feast day is July 6th . Her grave is in the church dedicated to her in Nettuno, south of Rome, and was dedicated to St. Popes Paul VI and John Paul II visited.

Relics of the martyr are mainly in two churches: A larger arm relic is in the possession of the hometown of Corinaldo, where it can be seen in the crypt of St. Maria Goretti. The bones and the head are combined in Nettuno to form an artificial body that rests in a glass reliquary of the whole body. The visible parts of the body are made of wax. Relics of the saints are also embedded in the altar of the church in Brockdorf , and there are relics in the pilgrimage church of the Birth of Mary in Pettenhofen .

Maria Goretti are consecrated various churches and chapels in Germany , among others in Biebesheim am Rhein , in Brockdorf and in Lippoldsberg . The church of St. Maria Goretti in Meinersen was profaned in September 2014 and demolished in 2015, the St. Maria Goretti Chapel in Loitz , built in 1955, was closed in 2013 and has since been sold. In addition, there are kindergartens and schools that are under the patronage of Maria Goretti.

In Vienna-Donaustadt , the Maria Goretti Church in Neukagran is consecrated to the saints. The church was built in 1959 according to the plans of the architects Peter Czernin and Lukas Matthias Lang .

In Belgium, Ghent is the location of a St. Maria Goretti Church, in the German-speaking St. Vith there is a school with boarding school called Maria Goretti School.

In Italy, apart from Nettuno, churches in Rome , Fonteblanda and Mormanno are consecrated to St. Maria Goretti .

A “Educandário Santa Maria Goretti” can be found in Teresina .

There is a St. Maria Goretti school in Chambellan.

In Québec City district Charlesbourg is the church of Ste. Maria Goretti.

In Long Beach , California, there is the St. Maria Goretti Catholic School.

A “Collegio Santa Maria Goretti” was built in Lima .