The Hughes AIM-4 Falcon is an infrared or radar-guided air-to-air guided missile produced by the Hughes Aerospace Group . 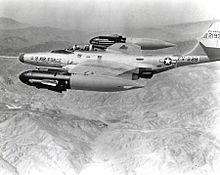 Development at the Hughes Aerospace Group began in 1946 under the project name Dragonfly. The AIM-4 was designed to fight bombers . The first test start was carried out in 1949. The guided weapon was designed so that it could be used both from the wings and from the weapon shafts of the fighter planes. The Hughes company supplied the guided weapons as well as the radar systems and fire control equipment for the aircraft. The series production took place in the factory in Tucson from 1954. The first copies were delivered to the US Air Force in 1956 . The AIM-4 was the US armed forces’s first air-to-air guided missile.

The guided missiles were named AAM-A-2 at the beginning of development. In 1955 the designation was changed to GAR-1, respectively. GAR-2 / -3 / -4 changed. The designation AIM-4 Falcon was introduced in 1965.

The AIM-4 formed the basis for an entire family of air-to-air guided missiles that included the AIM-26 Falcon , AIM-47 Falcon, and AIM-54 Phoenix .

From May 1967 F-4D Phantom II used the US Air Force AIM-4D in the Vietnam War . The F-4D could carry two AIM-4 and two AIM-9 Sidewinder that had been developed by the US Navy . It turned out that the AIM-4 was unsuitable for aerial combat. The basic problem was that the infrared seeker head could not be cooled during the entire flight time because the coolant supply was limited. Should the missile be fired, it would take about five seconds for the seeker head to cool - which meant an eternity in aerial combat. If the target could no longer be grasped and the seeker head was cooled several times, the coolant was eventually used up. The lack of a proximity fuse was also unfavorable, as the target had to be hit directly. The AIM-4 was able to shoot down about five Vietnamese aircraft, but it was withdrawn in 1969 in favor of the Sidewinder . The last Falcon were not retired until the F-106 Delta Dart was taken out of service at the end of the 1980s.