The AIM-152 AAAM (short for Advanced Air-Air-Missile ) was a paper-only air-to-air missile of the United States Armed Forces . It was designed as the successor to the AIM-54 Phoenix , which had been in use since 1974 . The development, which lasted from 1982 to 1992, was discontinued prematurely after the end of the Cold War and the AIM-54 was ultimately replaced by the AIM-120 . 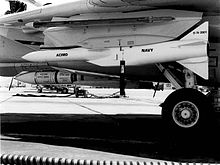 Mock-up of a possible design on an F-14A

In early 1982, the US Naval Weapons Center started the program to develop the AIM-152 AAAM. It should replace the existing AIM-54 Phoenix in the US Navy . This program should be initiated with a two to three year technical feasibility study in which, among other things, simulations should be created to test the possibilities of the various designs. It was then planned to carry out the first hardware tests, which should result in the launch of a fully functional test rocket. Right from the start, however, the US Congress demanded that the US Air Force as well as the US Navy should participate in the project. This is where the missile from the F-15 Eagle and the future fighter aircraft emerging from the Advanced Tactical Fighter program should be deployed. However, in an official statement, the Air Force denied the need for such a missile, whereupon the Navy continued to pursue the project independently.

The design of the AIM-152 was smaller than its predecessor AIM-54 Phoenix. The wing surfaces should also be smaller with undiminished performance. It was also planned that the missile should achieve a range of around 270 kilometers (km) at a speed of Mach 4. With a diameter of 229 mm and a weight of 330 kilograms (kg), it would have been considerably lighter than the Phoenix. The weight of the warhead should be between 13.6 and 22.7 kg. In some areas (including dual seeker head, solid ramjet drive ) the AIM-152 was similar to the Advanced Common Intercept Missile Demonstration (ACIMD) project, which was also abandoned.

An improved version of the F-14 Tomcat was to be used as a carrier aircraft . With this weapon combination the Russian supersonic bombers Tu-22M Backfire and Tu-160 Blackjack should be intercepted.

When development actually began in 1988, two different company consortia were selected. These were Hughes / Raytheon and McDonnell Douglas as well as General Dynamics and Westinghouse .

The design by Hughes / Raython and McDonnell Douglas was based on the concept of the Advanced Intercept Air-to-Air Missile (AIAAM), which was a mixture of solid rocket with ramjet engine ( Ramjet ). When a possible carrier aircraft takes off, the solid fuel propulsion system should first be ignited and the ramjet engine should be started after a certain speed has been reached. This hybrid system has the advantage of very high speed and a greater range than was actually required. A possible supplier of this propulsion system, with which the Vought Supersonic Tactical Missile (STM, a research rocket of the US Navy) was equipped, was the Chemical Systems Division (CSD) of the United Technologies Corporation (UTC). The only disadvantage of this drive system was that the initial acceleration was much lower than that of the competing model.

In addition, a dual search head was planned, which should have an infrared detector and an active radar . The length of the entire design was 3658 mm.

In contrast to the competition, General Dynamics and Westinghouse proposed a rocket with multi-pulse solid propulsion. It should be fired from a round starting container, as the manufacturer planned to use it on VTOL- enabled aircraft. The dimensions of the launch container should be 406 mm × 3607 mm with a weight of about 340 kg (including the rocket). The launch container should contain a rear-facing radar so that the launch aircraft no longer had to fly towards the target after the missile was launched. During the march phase, the rocket would be guided to the target via semi-active radar and an inertial navigation system. The rocket itself should be equipped with an electro-optical seeker to make jamming attempts much more difficult. An IR viewfinder as a backup was also considered.

End of the project

After the end of the Cold War, development of the AIM-152 - as with other projects that were primarily designed to serve the defense against the Soviet Union - was discontinued in 1992. Before that, however, it was given the official name YAIM-152A, with the "Y" being the identifier for prototypes . No prototype of the AIM-152 has been built and all images published are concept art or artistic representations only.