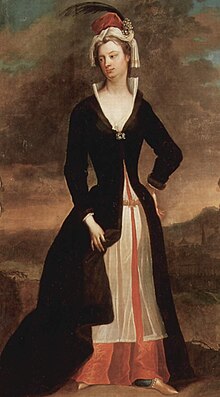 Lady Mary Wortley Montagu (born May 26, 1689 in Thoresby, Nottinghamshire , † August 21, 1762 London ) was an English writer and poet. The letters she wrote during her stay in Constantinople and published posthumously as Turkish Embassy Letters made her known throughout Europe. Lady Mary also became known during her lifetime as the center of a literary and intellectual scene made up of poets such as Alexander Pope , John Gay and Mary Astell . Lady Mary also advocated variolation in smallpox .

Lady Mary was the eldest daughter of Evelyn Pierrepont, 5th Earl of Kingston , later 1st Duke of Kingston . Her mother was the daughter of William Feilding, 1st Earl of Denbigh . She had two sisters and a brother. Mary received a typical upbringing for women of her class, including drawing, Italian, embroidery, cooking, dancing and horse riding. Mary otherwise owes her education to her own initiative: She benefited from her father's extensive library and read a lot; she also taught herself Latin by herself. There is some evidence to suggest that her brother was somewhat supportive of this.

In 1712 she married Sir Edward Wortley Montagu , the brother of a pen pal, without her father's consent. The first few years of the marriage were marked by financial difficulties and lengthy periods of separation. In 1713 their son Edward (1713–1776) was born. In 1713 her brother died of smallpox at the age of 20 ; in December 1715 Lady Mary fell ill with it herself. The memory of it was a motivation for Lady Mary to later campaign for the smallpox vaccination.

With George I's accession to the throne in 1715, her husband had the opportunity to accept a post as Junior Commissioner of the Treasury and also to become a member of parliament. He bought a house in London, which he moved into with Lady Mary. With the move to London and her husband's new position, Lady Mary had access to the English court. She befriended a number of well-known personalities, including Charlotte Clayton, lady-in-waiting to the princess, later Lady Sundon, Abbé Antonio Conti, cosmopolitan from Venice, as well as the poets Alexander Pope , John Gay and Mary Astell , who campaigned for women's rights. Pope admired Lady Mary very much, and she kept in correspondence with him for many years, even after the family moved to Turkey (then the Ottoman Empire ).

Upon her return to London, Lady Mary quickly became a social hub and a prominent voice in the English literary and intellectual scene for the next 20 years. On the one hand, this was due to the circle of intellectual friends with whom she surrounded herself and regularly exchanged ideas. On the other hand, the publication of some poems and a letter to Abbé Conti, which she wrote during her time in Constantinople, contributed to her reputation as a clever woman and writer. Her reputation, however, suffered from a feud with her former boyfriend, Alexander Pope, who turned away shortly after she returned from Constantinople. The reason is presumed that Lady Mary did not give in to his advances. So Pope began a series of publications in 1728 in which he attacked Lady Mary and the Lady Mary partly answered by satirical writings. As a result, there were further anonymous attacks against her, and various scandals were accused of her.

In 1739 she moved to the continent, where she first settled in Avignon in 1742 and four years later in Brescia . In 1758 she moved to Venice . During this time she conducted extensive correspondence with her daughter and old friends in England. After the death of her husband in 1761, she returned to England. She reached England in early 1762, but died in August of the same year.

Her granddaughter was the British writer Lady Louisa Stuart (1757-1851).

Lady Mary Wortley Montagu has written a variety of poems, letters, and other prose texts such as romances throughout her life . She was also a prolific diary writer. During her lifetime she established a reputation as a poet and intellectual through her letters, which she exchanged with important personalities in England, and through her poems, which were mainly in manuscript form among friends. As a member of the aristocratic upper class and as a woman, it was considered inappropriate to publish your own writings, so that during Lady Mary's lifetime only a few of her texts were published, mostly without her consent. So were z. As their Stadteklogen ( Town Eclogues already published in 1716), which she wrote with Alexander Pope and John Gay, as pirated. The publication of a letter to Abbé Conti from Constantinople, which also established her first fame as a brilliant letter writer, came about in 1719 without her consent.

Lady Mary's reputation as a serious writer is based primarily on her posthumously published letters, which she wrote during her time on the trip to and in Constantinople and which became known as Embassy Letters . Her poetry has only been discovered by literary scholars in recent years. Topics of Lady Mary's poetry range from satire and love poetry to criticism of the male and female roles of the time.

Much of Lady Mary Wortley Montagu's work, however, is lost to posterity. Since poems were rarely published and often anonymously during her lifetime, it is often difficult to correctly assign poems to her as the author. Many of her writings, including her diary, were destroyed during her lifetime or after her death. Since the 1960s there has been an increasing number of modern editions of her works, such as her letters, her poems and her romances.

Use for smallpox vaccination (variolation)

In Constantinople, Lady Mary witnessed the vaccination of smallpox (actually variolation ), and sent her observations to her friend by letter on April 1, 1717. In the spring of 1717 she had her son through the English doctor Dr. Inoculate Charles Maitland. When smallpox broke out in England in 1721 and killed many people, she also had her daughter vaccinated. She also tried to promote the smallpox vaccination in her area. So she managed to convince King George I to have his grandchildren inoculated by Jan Ingenhousz - albeit after tests on orphans and prisoners. From then on, variolation spread throughout Britain, but it continued to be the subject of heated controversy in the newspapers. Variolation remained controversial, also because it did not always work reliably until the doctor Edward Jenner developed a better method in 1796 (" vaccination "). 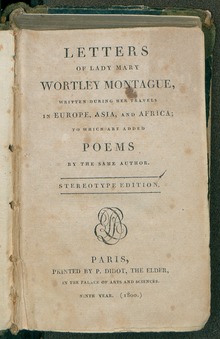 Historical and modern editions of works