The Variolation (also outdated inoculation, inoculation or Blatternbelzen ) is the transfer of Pustelinhaltes of smallpox ( "pox") from person to person through inoculation . It is a technique of vaccination against viral diseases that was used in people mainly in China and the Middle East until the 18th century .

Here were Virenkollektiva from the wounds of smallpox patients used that had survived the disease. Usually, a lancet was used to remove material from a pustule from a sick person , which was then introduced into the arm or leg of healthy people subcutaneously , i.e. through small wounds. As a result, attenuated (weakened) viruses were applied to healthy people. So a live attenuated vaccine was used. The immune reaction should be triggered by the multiplication of the viruses . However, through reverse mutation , the viruses could become disease-causing again when they multiply, which led to a relatively high death rate (2-3%) among those treated in this way. At least at that time the mortality with this treatment was lower than after infection without preceding variolation. According to a calculation of 1722, this was 1:14 for non-inoculated children and 1:91 for inoculated children. Another problem was that other diseases, such as B. syphilis or tuberculosis could be transmitted. In addition, the variolation could trigger a (real) smallpox epidemic.

When exactly this technology was developed is unknown, probably at the beginning of the second millennium in Central Asia . From there the knowledge about the variolation has spread to China and via Turkey to Africa and Europe. Avicenna recommended performing the variolation by skin-to-skin transfer or by inhalation. In India, cotton balls soaked with smallpox lymph were tied to the incised upper arm. Circassian traders introduced the technique to the Turkish part of the Ottoman Empire in 1670 . A medical work ("Goldener Spiegel der Medizin") that was created in China in 1742 documents four types of variolation, mostly through the introduction of material containing smallpox virus into the nose. The medical profession in England was informed in writing about this technique in 1713 by the Italian doctor Emanuel Timoni , who lived in Turkey , and in 1716 by Giacomo Pilarino . However, the reports were not considered to be of significance. 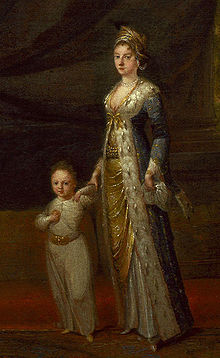 Lady Mary Wortley Montagu with her son Edward (about 1717)

The knowledge of the variolation was finally passed on by Lady Mary Wortley Montagu in 1721 after her return to England from Constantinople. In Constantinople, the doctor Charles Maitland performed a variation on Montagus' son, and on her daughter after her return to England in 1721. This happened under the supervision of various court physicians, including the chairman of the Royal College of Physicians , Hans Sloane . The new technique was permitted in England by King George I after it had first been successfully tested on six convicts in Newgate Prison against full amnesty on August 9, 1721, as well as six orphans. Maitland performed the variolation in both cases. In 1722 the two daughters of the Princess of Wales Caroline von Brandenburg-Ansbach , Amelia and Carolina, were successfully subjected to a variation. From then on the method was generally accepted, in 1745 the London "Smallpox Hospital" was founded, which was exclusively dedicated to the treatment and prevention of smallpox.

Knowledge of the variolation also found its way into the British colonies in North America in the early 18th century. Thus, Cotton Mather learned for the first time in 1707 by the then slave "Onesimus" about this technique. Onesimus from the Guramantese tribe (probably a Coromantee from present-day Ghana ) was inoculated in Africa before he came to America, and showed Mather the typical scar on his arm; other African slaves also reported unanimously about the variation from their homeland. In addition, Mather had read Timonius' report on the method used in Turkey in 1716; excerpts translated from Latin were then published in an article in the journal Philosophical Transactions of the Royal Society . Mather was able to convince one of ten Boston doctors, Zabdiel Boylston (* 1679; † 1766), of the technology during the smallpox epidemic in Boston in 1721 ; six of 287 inoculated people died after being infected with smallpox (2%). In contrast, 842 of 5,759 non-inoculated people (15%) who had smallpox died. Benjamin Franklin , whose son died of smallpox in 1736, became an ardent advocate of variolation himself. 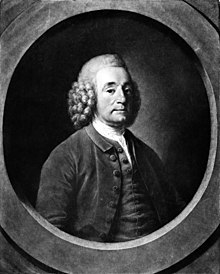 The doctor Théodore Tronchin was the first on the European continent to inoculate his son in Amsterdam in 1748 . The English doctor Thomas Dimsdale vaccinated Catherine the Great and her sons and grandchildren with this method and was therefore made a baron. In Vienna, Maria Theresia had four of her youngest children inoculated by Jan Ingenhousz in 1768 (on the advice of personal physician Gerard van Swieten ) after the procedure had been successfully tested on 100 orphans. The monarch also set up a free inoculation house for the population of Vienna and encouraged her other adult children and many other relatives to immunize. The technology came from Voltaire , who had heard about it in exile in England and made it known in the court of Prussia . In the writing Philosophical Letters of 1733 he recommended inoculation in France.

Variolation gained military importance in the American War of Independence : In 1776, the American attempt to conquer Canada failed due to an epidemic of smallpox that was rampant in the army. Their British opponents were spared the disease thanks to previously practiced variolation. George Washington learned quickly and by the next year his troops were immunized against smallpox by means of variolation. The process was used and perfected more and more in Europe and America.

From 1800 the variolation was increasingly replaced by Edward Jenner's vaccination , which was finally banned by law in England in 1840 (Vaccination Acts) .

The Sutton system or method goes back to the Suffolk practicing doctor Robert Sutton (* 1707; † 1788). The trigger is probably a classic variation of his eldest son Robert Jr. carried out by John Rodbard in 1756. He developed strong symptoms of smallpox. The Sutton method was practiced by him and his six sons.

With this method, a diet is followed two weeks before the variolation , in which the patient should not consume alcohol or meat. During the variation itself, care was taken to ensure that the lance, with which small amounts of lymph were transferred, did not penetrate too deeply into the recipient's skin (minimally invasive). Thereafter, the recipient should exercise outdoors until they develop a fever. This was treated with cold water, warm tea and porridge. The patient should, among other things, take preparations containing mercury and antimony against symptoms that occur in the mild course of smallpox disease .

The Sutton method was very popular and spread throughout Europe. In 1769, out of 40,000 patients inoculated in England, no more than 100 died.

Thomas Dimsdale criticized the Sutton method to the effect that inoculated people were able to stay freely among non-inoculated people and thus unintentionally spread smallpox. From this he concluded that entire churches should be inoculated. Together with Ingenhousz, he inoculated the boroughs of Little Berkhamsted and Bayford in Hertfordshire , ending a previous cycle of variolation and contamination.