Mehmet Shehu was named one of four children of Sheikh (Shejh) Ismail from Mallakastra and Sulltana Alikaj from Vlora born. His father was the Sheikh of the Tekke of Çorrush and involved in the Muslim rebellion of Haxhi Qamili . Mehmet Shehu attended the American vocational school in Tirana, which he graduated in 1932. He then received a scholarship to the military academy in Naples , which he had to leave after a short time due to communist activities. As a member of the International Brigades Shehu took part in the Spanish Civil War and after internment in France in 1942 returned to Albania, where he took part in the partisan struggle against the German and Italian occupiers and became a founding member of the Communist Party of Albania (KP).

Accusations and Death of Shehu 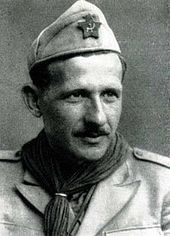 Mehmet Shehu as a partisan in 1944

After 1945 he graduated from the Moscow Military Academy and became Chief of Staff of the Army , Minister of the Interior in 1948 and Prime Minister in 1954.

Shehu's position became more and more powerful and influential in the late 1970s - especially after the death of Hysni Kapo . He was also one of 154 people who were awarded the title "Hero of the People" ( Hero i Popullit ).

In 1981 he was found shot dead in his bed with his pistol within reach. Under the direction of the almighty party leader Enver Hoxha, this was preceded by harsh criticisms of his address in the party leadership. a. It was charged that he had agreed to the engagement of one of his sons to a young woman who came from a “bad” former middle-class family who had not been on the communist side in the fight against the German occupation. The engagement had to be broken. The wife of another Shehu son had already been processed by the Sigurimi secret service because she tolerated the covert efforts of an employee of the French embassy to make contact - an unheard-of violation of applicable rules, even for the increased leeway of the children of senior officials.

After his death, Mehmet Shehu was denounced by Enver Hoxha as a long-time agent of several foreign secret services. To date, the official version of the suicide has been questioned but has not been refuted. Hoxha disliked Shehu and noted in his diary:

"This agent and mercenary of the foreigners got his head on the unity of the party and the people."

About a year after Shehu's death, numerous party and state officials were arrested and sentenced in secret trials in 1983, including Shehu's wife Fiqret and his sons, as well as Defense Minister Kadri Hazbiu , who had previously been Minister of the Interior and Head of the Intelligence Service for a long time and who was not related to Mehmet Shehu Feçor Shehu , who had previously worked for a long time in management positions of the Sigurimi secret service, most recently as its head, other senior secret service officials, Foreign Minister Nesti Nase and the Minister for Health Care Llambi Ziçishti . All are said to have prepared a coup and the liquidation of Hoxha under Shehu's leadership on behalf of the CIA, the Yugoslav UDB and the KGB.

Incriminating statements were obtained under torture. Hazbiu and Feçor Shehu could not be induced to admit the absurd accusations. Several defendants were executed and the others sentenced to long terms in prison. Some of them, u. a. Fiqret Shehu, died in custody. Shehus eldest son committed even during the investigation suicide .