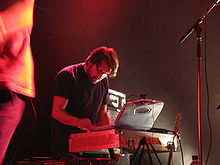 Micha Acher performing with The Notwist (2008)

During his school days, Acher founded a band with his brother Markus and Johannes Enders , which would later become the experimental jazz combo Tied & Tickled Trio . As a trumpeter, he has been part of the New Orleans Dixie Stompers group , led by his father Julius Acher, since 1988 . Acher still plays in this band today.

He has celebrated his greatest success so far as the bass player in the group The Notwist , but he has also become known with various side projects in the music scene that has formed around the record label Hausmusik . In addition to Tied & Tickled Trio, the bands Village of Savoonga , Ms John Soda , 3 Shades of Blues , Ogonjok and, since 2005, 13 & God , a project by The Notwist with Themselves from the record label Anticon, should be mentioned here . In 2011 he took over the musical direction of the Threepenny Opera at the Munich Volkstheater . As a composer he wrote the music for feature and documentary films together with his brother Markus; In 2010 he received the gold film music award for the film Sturm . He also wrote the theater music for productions by Christian Stückl in the Volkstheater in Munich.

Micha Acher is married and has two children.

Bands in which Micha Acher has worked as a studio musician: