The international competitions for physical exercise and sport (Concours Internationaux d'Exercices Physiques et de Sports) held in the French capital Paris as part of the World Exhibition ( Exposition Universelle et Internationale de Paris ) also included two rugby games. The International Olympic Committee (IOC) assigned these games to the program of the 1900 Summer Olympics (Games of the Second Olympiad) . Rugby, which had a history in common with football until 1863 , was thus equated with football in the early history of the Olympic Games.

The management of the world exhibition had planned three games between the French selection and a club team from Germany and the United Kingdom , each of which should compete against each other. In the organizers' deliberations, however, it was not a question of a tournament, but of three equal-ranking games with their own winners and prizes. The British were unable to arrive in time for the game against Germany scheduled for October 21, so there were only two games.

At that time, team competitions were generally advertised as competitions between club or association teams. In international competitions, they usually represented the country in which the club or association was based. The German team consisted mainly of the in Frankfurt -based association football club Frankfurt (later SC 1880 Frankfurt ). The team was also strengthened by Hugo Betting from FV Stuttgart 93 and August Schmierer . The latter had left the Frankfurt soccer club in 1897 and had since been elected to the board of the Cannstatter soccer club . A selection of players from the Moseley RFC and other teams from the Midlands traveled from Great Britain under the name Moseley Wanderers . The team of the French association Union des Sociétés Françaises de Sports Athlétiques (USFSA) was actually a team that is similar to the current term of a national team . It was a selection team made up of players from the best French rugby clubs.

The game between the French and the German team took place on October 14th, the match against the British on October 28th. The venue for both games was the Vélodrome municipal on the grounds of the World Exhibition in Vincennes . The most widespread variant rugby union was played , in which a team consisted of 15 players.

In the opinion of everyone involved, even the French spectators and the press, the match between France and Germany was a scandal because of incomprehensible decisions by the referee. The superiority of the German team was expressed in the lead at halftime. The longer the game went on, the more incomprehensible the French referee, Monsieur Potter, whistled. The Germans' proposal to appoint an English referee before the game had been rejected. So the suspicion of taking sides remains unresolved. 3500 spectators followed the game.

The second game was led by the same referee who was now the shadow of the first game. However, this game was devoid of any partisanship; The French team had to be considered and the result was clear. However, the British had only traveled to France the night before the game - some players had been used in a home game the day before and were therefore completely exhausted. With 6,000 spectators, the France – England game was the most popular sporting event of the entire 1900 Olympic Games. 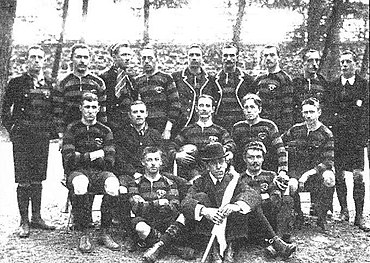 Despite the lack of character of a tournament, the IOC subsequently determined a final ranking and assigned the medal ranks, which, as shown, is also reflected in the medal table. Due to the failure of the game between the British and Germany, both teams were awarded second place. The French Collas, Gondouin, Henriquez and Sarrade made up two thirds of the French team that took part in the tug of war competition.

1 Hugo Betting did not belong to the Frankfurt soccer club, but to the FV Stuttgart 93 .

2 August Schmierer had meanwhile left the Frankfurt soccer club and was chairman of the Cannstatter soccer club .

Sports at the 1900 Summer Olympics
Rugby at the Olympics
Olympic champion in rugby
1 = rugby union rules, from 2014 rugby 7