The Operation Hailstone (often incorrectly Hailstorm called), translated "hailstone" was a member of the US Navy in the Pacific War during World War II to the elimination of the Japanese base on Truk (Chuuk). The operation took place on February 17 and 18, 1944 and can be attributed to the Battle of the Marshall Islands . 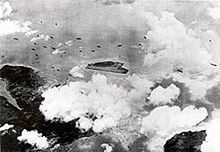 Two American reconnaissance aircraft type PB4Y could make on 4 February 1944 photos of the Japanese naval base at Truk Atoll in. Since Truk had been in Japanese possession since the First World War and since then has been consistently sealed off from the outside world, there was hardly any information and there were no current recordings of this group of islands. The Americans knew that Truk had been intensively developed as an important naval base by the Japanese and that the lagoon offered sufficient anchorage for numerous, even very large ships, but the evaluated images exceeded their expectations.

Truk was the main base of the Imperial Japanese Navy in the central Pacific. Numerous large warships anchored in the lagoon. The flagship of the 2nd Fleet, the battleship Musashi was there, as well as aircraft carriers , cruisers , destroyers and submarines . Airfields with hundreds of fighter planes could also be discovered in the pictures . Without question, the archipelago was a worthwhile target for the US carrier fleet.

Since the most important atolls of the nearby Marshall Islands had been taken faster than expected, the operation against Truk planned for April could now be carried out in February. The Admirals Marc Andrew Mitscher and Raymond A. Spruance had the powerful Task Force 58 with nine aircraft carriers, seven battleships and numerous cruisers and destroyers. The porters carried more than 700 warplanes, about twice the number of what the Japanese had stationed on Truk. The US aircraft were also more modern than those of their opponents. In addition, quite a few of the Japanese planes had just arrived from Japan and most of the pilots had no combat experience.

The US armed forces were divided into three aerial combat groups. A group was also available for land deployment. Even before the dawn of the 17th of February started escort carriers of Task Force 58 F6F Hellcats for aerial reconnaissance. To their surprise, however, they did not find any enemy machines in the airspace over Truk. The large Japanese ships could not be made out either.

The first wave of attacks left the American aircraft carriers to destroy defense and port facilities as well as ships anchored in the lagoon. The Dauntless - dive bombers and Avenger - torpedo bombers were with armor-piercing bombs for ships and cluster bombs equipped to attack aircraft on the ground. They were accompanied by interceptors .

The second wave of attacks, which began shortly afterwards, also aimed to destroy the defenses on Truk.

As a small Japanese convoy (convoy No. 4215), consisting of the light cruisers Katori , and Naka , the destroyers Nowaki and Maikaze , the minesweeper Shonan Maru and used as a transporter auxiliary cruiser Akagi Maru tried over the north passage from the lagoon to escape, a third wave of attacks was launched to attack these ships. To do this, machines took off from the aircraft carriers Yorktown , Intrepid , Bunker Hill and Cowpens . They reached the convoy about 30 nautical miles west of Truk.

The Katori and the Shonan Maru were easily damaged and erupted from the formation to escape individually. When the planes had to return to their carriers due to lack of fuel, Admiral Spruance's ships had already come within range and opened fire. The auxiliary cruiser Akagi Maru , which had 512 soldiers and almost 800 members of the Navy and seafarers on board, received three bomb hits and had to be abandoned. Although a number of survivors could not be rescued from aboard the auxiliary cruiser, which was not exactly certain, they later went down with the cruiser Katori (measured against the number of victims of around 1,300 deaths, it was one of the most serious losses suffered by the Japanese during the attacks on Truk) , when this together with the Maikaze and the minesweeper was overtaken and sunk by US surface vessels about 40 nautical miles northwest of Truk in the afternoon .

Since it had now been discovered that the large Japanese warships were no longer in the Truk lagoon, the American fighter planes were used for the next three waves of attack to sink the numerous supply ships and eliminate Truk as a Japanese base of operations. Special care should be taken to ensure that no Japanese aircraft could attack the American fleet the following night. The runways in particular were bombed intensively and numerous Japanese fighter planes on the ground were put out of action.

Around midnight, the Task Force's radar screens showed 58 enemy echoes. The USS Enterprise immediately launched Corsair - night fighter to intercept the machines. But since the Japanese could not make out the exact location of the American ships, the signals disappeared again from the radar screens.

The night fighters were instructed to move out of the area as quickly as possible so as not to attract the Japanese machines. The command came too late for a hunter; an enemy aircraft could break through into the immediate vicinity of the USS Intrepid and launch a torpedo attack. The thrown torpedo struck near the rudder and rendered the aircraft carrier rudderless. There were some victims on board.

The USS Intrepid had to leave Task Force 58 and return to Pearl Harbor for repairs under escort .

As later research showed, the Japanese machines were not started by Truk, but by Saipan or Rabaul .

The Americans had also trained for a night attack. It should be carried out using radar. USS Enterprise's Torpedo Squadron 10 had been preparing for it for weeks. Their Avengers were equipped accordingly.

When they arrived over Truk in their planes, they were met by heavy fire. Even so, the defenders could only shoot down a single plane. The night attack was extremely successful with 13 hits out of 48 drops.

At dawn on February 18, US reconnaissance planes again took off from the aircraft carriers to investigate the situation over Truk. But the Japanese were no longer capable of air defense. The bases on Truk were badly damaged and out of order.

The following two waves of attack were limited to logistical facilities and the ships lying in the lagoon. In the end, the petrol tanks were bombed because their smoke would have restricted further attacks. When the second wave of attacks of the day began, the Japanese destroyer Oite entered the lagoon. He had 523 survivors on board from the light cruiser Agano , which the day before had been torpedoed and sunk by the submarine Skate about 160 nautical miles north of Truk . The Oite originally wanted to set course for Saipan, but was ordered back to Truk for defense.

Bunker Hill aircraft fired at the ship first before a torpedo attack was flown. The Oite was badly hit amidships and broke into two parts after a severe explosion, which sank immediately. A total of 695 Japanese sailors died (all 523 survivors of the Agano and 172 crew members of the destroyer). Only 20 Oite survivors were ultimately able to reach the shore of the lagoon.

A third wave of attacks was recalled shortly after launch. She dropped her bomb load on the sea and returned to the porters.

Task Force 58 ended its operation against Truk and began the march back to its anchorages in Majuro Atoll in the Marshall Islands that same day .

Result of the operation

A total of two cruisers, five destroyers, four military auxiliary ships and 31 transport ships were sunk by the Americans on two days of the attack. 200 destroyed and more than 100 heavily damaged Japanese fighter planes remained on the air bases.

Consequences of the operation

The Japanese Navy had to do without Truk as a naval and air base. They had moved their main fleet to Palau shortly before the start of the attack , but incomprehensibly they left their supply fleet behind in Truk, where they had now been almost completely destroyed, with serious disadvantages for subsequent Japanese operations.

With the attack on Truk, often referred to as revenge for Pearl Harbor , the Americans succeeded in incapacitating one of the most important enemy bases. Truk was not taken by American landing forces, but it was hit so badly that it was no longer of any importance as a base and the threat from there ended. Truk remained in Japanese hands until the end of the war, but played no role in the further course of the battle and the very strong crew of the archipelago ultimately had to devote more to growing vegetables than to the craft of war in order not to starve to death.

The way was now clear for the Americans to attack the Mariana Islands , which included important Japanese bases such as Guam , Saipan and Tinian .

Sunk Japanese ships in the Truk lagoon (or in the vicinity of the atoll):