Map of the Allied military operations in the period from March 24 to 28, 1945 on the Lower Rhine

The Operation Plunder ( German  operation Rhine crossing ) was during the Second World War in March 1945 by British , Canadian and American conducted troops crossing the Rhine between Emmerich and Wesel . The main attack took place in the British section between Wesel and Rees . The Rhine crossing north of the Ruhr area together with the American crossing of the Rhine near Remagen formed the basis of the Ruhr basin .

The planning of the Supreme Commander Allied Expeditionary Force Dwight D. Eisenhower originally envisaged a main advance on the left wing through the North German Plain to Berlin for the fighting in the German Reich , which was to be undertaken by the British 21st Army Group under the command of Bernard Montgomery . Operation Market Garden, which was aimed at Arnhem at an early stage in order to bypass the West Wall and to gain a Rhine crossing , failed in September 1944. As a result, the Rhine should first be reached on the whole front and then a passage through the 21st Army Group should be forced. Many factors have delayed this process:

Finally, in the area of ​​the 21st Army Group on March 10, 1945 near Xanten, the pincer movement on the left bank of the Rhine was completed by the 1st Canadian Army , reinforced with parts of the British 2nd Army , to the east and south-east and by the 9th Army . US Army had been run north. The left bank was then completely in Allied possession.

Already on March 7th, the 12th US Army Group had unexpectedly succeeded in taking a Rhine crossing with the intact railway bridge at Remagen without a fight and forming a bridgehead. This, together with the fact that Soviet forces were already close to Berlin, led to a change in the weighting of Eisenhower's planning in favor of a greater participation of the two southern army groups in the further advance. The priority of the Rhine crossing of the 21st Army Group remained, however. The last remaining intact bridge near Wesel was blown up by German troops on March 10th. As expected, the Army Group therefore had to fight its way over the Rhine. The extensive preparations for this were initiated immediately; smoke was also used on a larger scale to cover up the area.

Mortar soldiers of the 8th Royal Scots during the operation to cross the Rhine on March 24, 1945 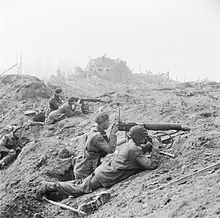 Operation Plunder began 13 days after the German troops had withdrawn across the Rhine. The British XXX Corps under General Horrocks opened combat operations at 9:00 p.m. on March 23, 1945 with the attack of the 51st (Highland) Division . Supported by swimming tanks , all three brigades had crossed the Rhine at Rees by 9.45 a.m. , but the fighting continued until the afternoon. In preparation for the operation, the population of the cities on the left bank of the Rhine that had been captured by Allied troops had already been evacuated to Bedburg-Hau , the left bank of the Rhine had been fogged up and the construction of temporary bridges had begun. Wehrmacht units standing on the right bank of the Rhine fired artillery guns, in particular, with no view of the opposite side of the river.

The Rhine crossing near Wesel began at 10:00 p.m. After the Royal Air Force had bombed the city ( air raids on Wesel ), the 46th Royal Marine Commando crossed the Rhine. Reinforced by the American 17th Airborne Division, the fighting continued until the next evening. In the meantime the 15th Scottish Division had crossed from Xanten and secured the bank of the Rhine at Bislich against little resistance . On March 24th, as part of Operation Varsity, troops landed at Hamminkeln to interrupt the German supply routes. The temporary bridges were used on March 25th.

By March 27, the fighting of Operation Plunder was largely over.

Operation Flashpoint began on March 24, 1945 . Its aim was to build a bridgehead on the right bank of the Rhine between Wesel and Walsum ; It was directed by General William H. Simpson , Commander in Chief of the 9th US Army . While the 30th US Infantry Division attacked between Wesel and Möllen , the 79th US Infantry Division concentrated on the section between Möllen and Walsum. General Alfred Schlemm was on the German side with the 1st Parachute Army . 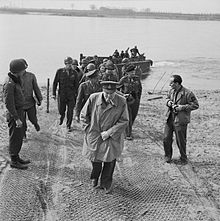 Churchill on the east bank of the Rhine south of Wesel on March 25, 1945

Thanks to the successful crossing of the Rhine through the operation, the Allied forces were able to enclose a large part of the Wehrmacht units remaining in West Germany in the Ruhr Basin .

On March 25, the British Prime Minister Winston Churchill and Field Marshal Bernard Montgomery visited the headquarters of the Allied Commander-in-Chief Dwight D. Eisenhower , where both of them crossed the Rhine with three or four US generals and half a dozen American soldiers in an infantry landing craft near Voerde and Spent 30 minutes in enemy territory.