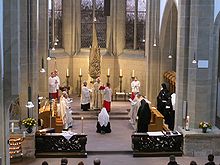 Subject of the vows and legal consequences

In detail, the professed promises to follow the " evangelical counsels " of poverty , celibate chastity and obedience mentioned in the Gospel of Matthew ( Mt 19,12-29  EU ) and to stay for a certain period of time (temporary profession) or permanently (perpetual profession ) to bind to the religious community. The taking of the vows has canonical consequences and affects the civil employability and property of the professed. The professed profession represents an obstacle to marriage that prevents a valid church marriage. In the event of leaving the order, an indult would have to be issued in order to dispense with the legal consequences of the vows.

Some orders have more than three vows; B. the vow of obedience to the Pope with the Jesuits or the vow of the enclosure with the Poor Clares . The vows can also follow a different systematic in terms of content; so the lay monks and nuns of the Benedictine order ( Benedictine , Cistercian and Trappist ) on the Rule of St. Benedict declining vow of Oboedientia (obedience), stabilitas loci (tied to one place, which is a member of a particular monastery binds) and Conversatio morum suorum (monastic lifestyle) the monastic way of life including voluntary poverty and celibate chastity. The Dominicans, on the other hand, only promise obedience, which they regard - following the theology of Thomas Aquinas - as the most outstanding of the three religious vows and which in this understanding implicitly includes observance of the other two counsels.

Occasionally, where this has not already been done, a religious name is accepted at profession and a new habit is presented. Other external signs can also serve to clarify the bond entered into by profession, such as the handing over of the cup to the monastic order. B. Often the handing over of a veil , which differs from that of the novices, or also a ring as a sign of the marriage bond to Christ and the Church.

The members of the old orders , i.e. the communities that have existed for more than 700 years, usually first take temporary vows after the novitiate , which bind them to the community for a limited period of time (usually three years). After this time, the solemn profession for life follows. Sometimes a repeated temporary profession is allowed, which is then possibly followed by an eternal bond.

Crown for the golden jubilee of profession, Lake Constance area, around 1760

Members of religious orders of more recent origin (so-called congregations) take so-called simple vows instead of solemn vows, which are usually initially renewed annually. After taking at least three times for one year each, the order member can then be admitted to perpetual vows. Often the time commitment beyond the three-year junior period can be extended annually for a further year up to a certain maximum before the simple perpetual vows may have to be taken forever.

A solemn profession is usually made in the context of Holy Mass , sometimes in a pontifical office . Temporary professions can also be carried out in the context of another liturgical celebration, such as a Vespers , or outside the liturgy in the form of a solemn act in the chapter house or in the oratory in the presence of the community. Similar habits apply to simple perpetual and temporal vows. Round anniversaries of the day of profession (jubilee of profession, "jubilee profess") are counted in a similar way to wedding anniversaries (silver, gold or diamond jubilee of profession, etc.) and are sometimes also celebrated liturgically.

There are no legal differences between the binding effects of solemn and simple religious vows. The distinction, like the difference between orders and congregations, no longer plays a practical role in current Roman Catholic canon law and only results in a slightly different legal position in the property rights of the members.

The members of societies of apostolic life - unlike religious - do not make public vows, but a private promise, which is equivalent in content to the religious vows, but does not create the same binding under canon law. After a few years, the members of these communities make definitive temporary promises that establish unlimited membership in their association.

Consecrated virgins reaffirm their Sanctum Propositum (the holy determination) to want to live in the state of virginity in the liturgy of the virgin consecration before the local bishop . In contrast to the promise of the members of societies of apostolic life, this declaration is a public vow in the canonical sense, but in contrast to the religious vow does not establish membership in a community or a separating obstacle to marriage.